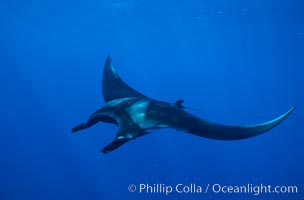 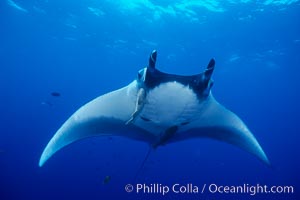 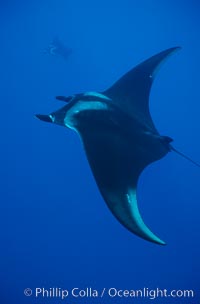 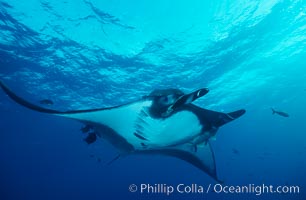 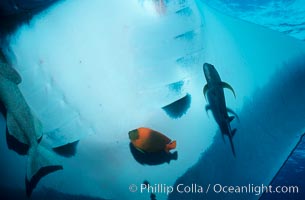 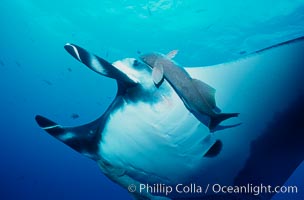 The following is included by generous permission of Rick Martin and is intended to assist students with their research. Do not reuse or republish without prior written permission.

On the Biology of the Manta Ray (Manta birostris), Compiled by Richard Martin, Dec 1998

Recognition: a gigantic devilray with gracefully sculpted, falcate pectoral 'wings', paddle-like cephalic lobes projecting forward from the front of the head (actually extensions of the pectoral fins, supported by radial cartilages), and a very broad, rectangular mouth at the end of the head (a mouth type known as 'terminal'), pebble-like teeth in the lower jaw but not the upper.

Colour: variable, ranging from black, greyish blue, to greenish or reddish brown above (black colour morph sometimes with whitish, triangular shoulder patches), and nearly black, white with various degrees of greyish blotching (the precise pattern of blotching has been used to identify individuals), to almost pure white below; one albino specimen has been reported.

Habitat: occurs most often in nearshore waters (mainly over continental and insular shelves, but occasionally over deep water), near coral and rocky reefs; swim by flapping their large pectoral fins and are usually encountered near the surface or mid-waters of lagoons or seaward reefs, particularly near surge channels; in Australian waters, mantas sometimes migrate into temperate waters; they are capable of rapid speed and juveniles sometimes leap well clear of the water, landing with a loud slap (adults drive their bodies only partway out of the water and then fall back into the sea, sometimes perfoming 2 or 3 of these jumps in sucession); often host to one or more discfishes (especially the remora, Remorina albescens) and sometimes observed in association with dolphins, seabirds, sharks, and other rays (notably the spotted eagle ray, Aetobatus narinari); these rays actively seek the services of cleaner wrasses (Labroides spp.), often hanging over or swimming near "cleaning stations", sometimes several lining up to wait their turn.

Feeding: a gigantic filter-feeder, preying on planktonic crustaceans and small schooling bony fishes; filtering mechanism consists of transverse plates of pinkish-brown spongy tissue that bridge the gaps between successive gill bars (cartilaginous skeletal elements that support the gills); when feeding, the cephalic lobes are unfurled and spread (directing and somestimes apparently scooping plankton-bearing water into the mouth), the animal often swimming in slow somersaults (vertical loops) that are repeated over and over (this behaviour may keep the rays within a patch of particularly rich feeding, and may also concentrate planktonic prey to facilitate feeding); most often encountered as solitary individuals, but members of this species often aggregate in regions offering predictably rich feeding (such as off the Kona Surf Hotel at night and off Yap, in the western Caroline Islands) -- with up to 50 individuals clustered in the same general area, but not forming true schools.

Reproduction: ovoviviparous, with each of the pups wrapped in a thin-shell that hatches inside the mother, later to be born alive; one specimen harpooned off North Carolina expelled a pup (with one pectoral fin wrapped above its body, and the other wrapped below) in mid-trajectory when it leaped, a behaviour which may represent spontaneous abortion (ejected prematurely due to capture stress) or be part of normal birthing (If so, what a dramatic way to enter the world!); litter size 1 to 2 (usually 2) pups, with birthing apparently occur in relatively shallow water, where the young remain for several years before expanding their range farther offshore; mating behaviour in this species has recently (July 1997) been filmed off the Ogasawara Islands, Japan, and featured one or more males rapidly chasing a female for 20--30 minutes, after which one male nips the tip of either of the female's pectoral fins (which severely impairs her swimming), moves to her ventral surface, and inserts one of his claspers (paired intromittant organs, developed along the inner margins of the pelvic fins) into her cloaca (vent), thereby mating belly-to-belly; the male may hold onto the (much larger) female's pectoral fin for several minutes after removing his clasper, eventually letting her go free.

Danger to Humans: minimal unless attacked (especially harpooned) or otherwise startled, but the enormous size and power of this ray should invite respect.

Utilisation: formerly hunted commercially by harpoon from small boats off eastern Australia and in the Sea of Cortez (Gulf of California), this species is now rarely hunted; places where these rays can be reliably encountered (off the Kona coast of Hawaii and off Yap, to name two of the better-known locations), have spawned substantial dive-tourism industries; seemingly inquisitive, individual mantas sometimes approach and even solicit attention from divers, apparently enjoying the tactile stimulation provided by human contact (as well as the bubbles from scuba exhaust); in areas frequented by divers, however, mantas often become very wary of divers and cease to approach them. When approached or grasped rapidly, some individuals roll onto their backs (perhaps to keep the offending diver in sight?), sound (dive), and swim away rapidly, righting themselves only when some distance away; another behavioural response to approach by a diver from the side is curving one pectoral fin toward its back and the other toward its belly -- forming an S-shape in cross-section -- tilting its dorsal (top) surface toward the diver (possibly a defensive response?); in areas where divers often touch mantas, the rays often develop pinkish skin lesions that may persist for months (apparently these lesions occur where human touch has removed the protective mucus that coats the rays' skin). When diving or snorkelling with these magnificent, supremely graceful rays, resist the temptation to touch them and avoid obstructing their looping glide path while they feed.