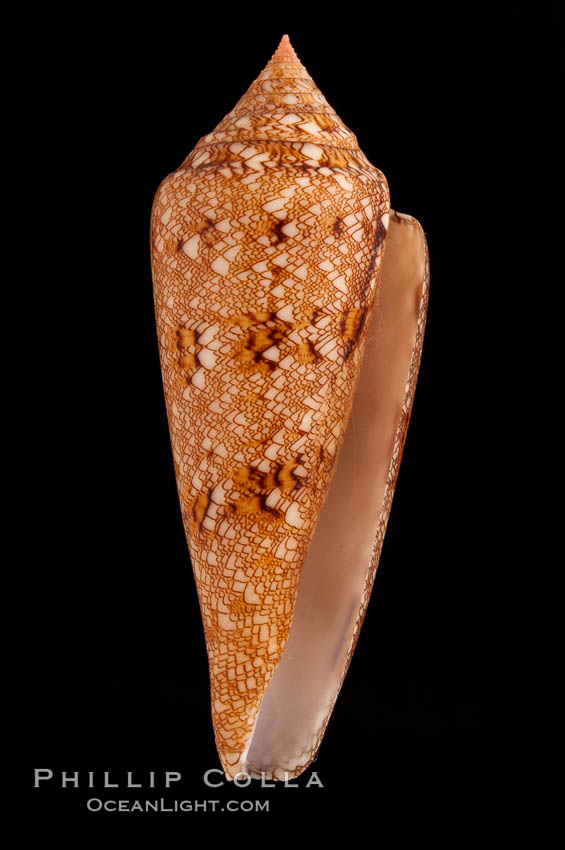 Species: Glory of the Seas Cone, Conus gloriamaris
Image ID: 08802
Format: Digital 2:3
Notable: Among collectors, the shell of the Glory of the Seas cone snail, Conus gloriamaris, has special significance. For many years it was one of the most sought after, and considered one of the most rare, shells in the world. Its elegant beauty, and moderate rarity even today, continues to elevate the Glory of the Seas above most other cones in terms of desirability. For a century after its description by Chemnitz in 1777, Conus gloriamaris was known from a relative handful of specimens and it developed a historic notoriety. In 1792 it was published that an earnest collector of Conus species, Chris Hwass of Denmark, purchased a Glory of the Seas at auction only to immediately destroy it in an effort to reduce the known population of specimens by one, thus making his other specimen that much more valuable. A mid-1800's report testified that the only known locale at which Conus gloriamaris was thought to be found alive was destroyed by earthquake, driving the rare species into extinction and making the known specimens spectacularly valuable. As recently as 1957, only two dozen specimens were known to exist and auction prices were well above $1000 apiece. Ten years later, the number of known specimens tripled as collectors discovered New Guinea collecting grounds. In 1969, a pair of divers found over a hundred live specimens at Guadalcanal in the Solomon Islands and the rarity of Conus gloriamaris was history. Nevertheless, the shell's historic significance and mystique continue. The Glory of the Sea Cone can now be afforded by most collectors, enabling them to possess an example of what was once the most pursued shell in the world, and what is still one of the most beautiful to behold.
Keywords: cones, conus gloriamaris, glory of the seas cone, shells
Purchase a print of this image
Categories:
Copyright © Phillip Colla / Oceanlight.com, all rights reserved worldwide.
This professional quality stock photo can be licensed in high resolution form by contacting the photographer: Phillip Colla, photos@oceanlight.com, (760) 707-7153, more info and photographer bio.