This is the first of my photographic efforts shooting the lunar eclipse the evening of April 14/15 2014. I spent the entire night out under the stars in Joshua Tree National Park, where I often shoot when looking for clear skies and stars at night. I photographed several compositions and locations within the park that evening, leaving my cameras out photographing unattended, but this is the one that caught my eye first. The rocks in the background are lit early in the evening by the rising moon when there is still some daylight blue left in the sky above, while the Joshua Tree itself is lit by my flashlight. There are some faint, short star trails in the blue sky but they are difficult to discern on this web version. The individual phases of the eclipse were photographed from 10:45pm through 2:45am, and are positioned in the proper locations and orientations in the sky but have been enlarged to illustrate how the illumination on the moon changes during the course of an eclipse and as it passes through the sky. I was fortunate that the sky remained clear enough throughout the entire eclipse that I could shoot quality images of all phases until the eclipse was done. 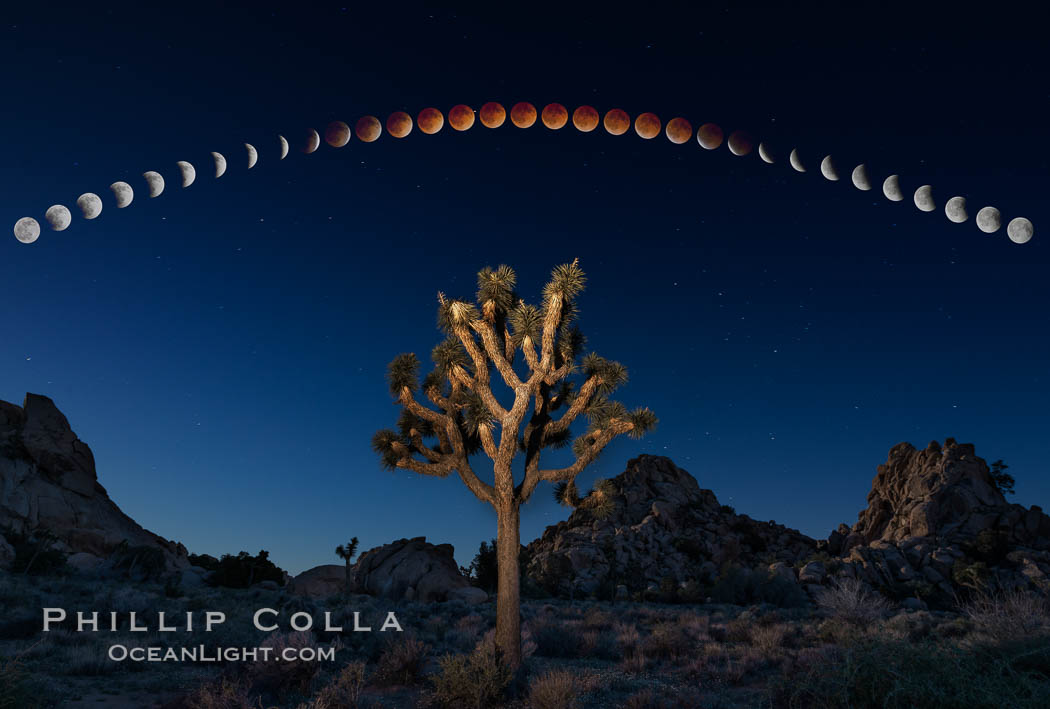 This image is available immediately as a print or for licensing, along with two other lunar eclipse sequence photographs from the April 14-15, 2014 full eclipse. Please contact me for more information. Cheers and thanks for looking!

A few photographic notes and how I planned to take this image:

I realized beforehand that this lunar eclipse would be characterized by a symmetry that made illustrating its path through the sky a natural. The “peak” of the eclipse, when the moon is furthest within the umbra (shadow) of the Earth, occurred almost due south of my location which meant it would also occur at the highest point along the path the moon took through the sky.

The beginning and ending of the eclipse took place 67 degrees apart horizontally. To include the entire sequence in one image but without being wasteful of space at the left and right of the composition, I choose to use a focal length close to 20mm giving me a lateral field of view of 82 degrees. The inclination of the moon at the point of peak eclipse was 45 degrees above the horizon, which also worked well for a 20mm lens since it offers a vertical field of view of 62 degrees, enough to include some foreground below the horizon and space above the path of the moon. (I used the Photographer’s Ephemeris to figure the angles out as well as the due-south direction of the peak eclipse point.)

In order to have the composition pre-set correctly hours before the eclipse began, I used a compass to make sure it was aimed directly south (thanks REI for showing me how to correct for magnetic declination in southern California, otherwise I would have been off by about 10 degrees!). Once I choose my spot in what I call “Queen’s Valley” in JTNP, an area dense with healthy, tall, picturesque Joshua Trees and interesting rocks, I then did a kind of human protractor thing with my arms to make convince myself the moon’s path would go above the tree but below the top of my field of view. I locked the camera down on the tripod, waited for dusk and had a beer. I second guessed myself until the moon finally reached the left edge of the frame in what looked like a perfect position. The geometry worked out about right! (I could have done this image entirely without worrying about the angles, assembling things pell-mell later in Photoshop, but I really wanted to get as much of it correct in the camera as possible.)

I used an intervalometer to cause the camera to take photos every few minutes. I did a little light painting as the night went on, but the base frame I liked the most occurred about 70 minutes after sunset, with the moon out of frame to the left. The moon illuminated the background rocks nicely and complimented the light painting I did on the tree.