The classic sonnet “Ozymandias” by Percy Bysshe Shelley has within it two stark ironies. Can you discern them both?

I met a traveller from an antique land
Who said: Two vast and trunkless legs of stone
Stand in the desert. Near them on the sand,
Half sunk, a shatter’d visage lies, whose frown
And wrinkled lip and sneer of cold command
Tell that its sculptor well those passions read
Which yet survive, stamp’d on these lifeless things,
The hand that mock’d them and the heart that fed.
And on the pedestal these words appear:
“My name is Ozymandias, king of kings:
Look on my works, ye mighty, and despair!”
Nothing beside remains: round the decay
Of that colossal wreck, boundless and bare,
The lone and level sands stretch far away. — Percy Bysshe Shelley

While Ozymandias tells the mighty trailing him in history to despair at the unreachable loftiness of his works, in fact all that remains of the arrogant pharaoh is a shattered statue bereft of majesty. The rulers following him should indeed despair, not through their inability to equal his glory but rather by realizing they too are destined for obscurity, as Ozymandias is, by the ravages of time. A second irony stems from the notion that Ozymandias’ place in history is sealed not by the permanence and grandeur of the monuments that he erected, but by the fact that their decay is extreme enough to have caught the eye of the nameless author, whose simple tale of Ozymandias’ ruin will remain when all physical sign of once powerful king is forever gone. 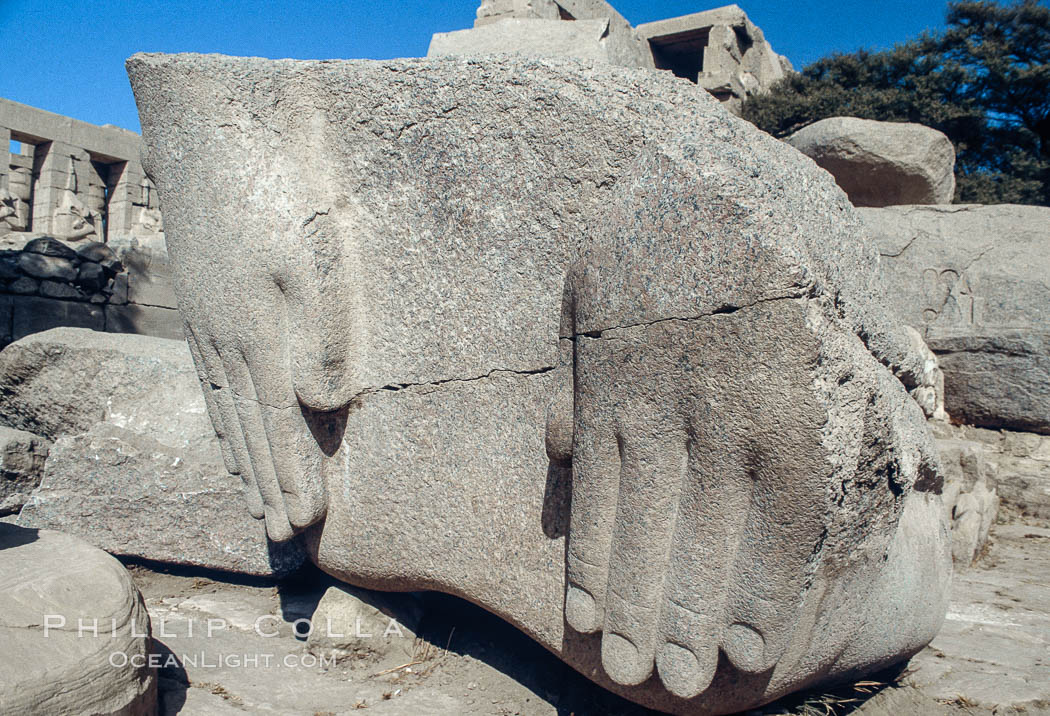 Ozymandius is widely considered to be Ramses II, the 13th century BC pharoah who ruled Egypt for 67 years. The historical mark he left upon his country is unrivaled by any other pharoah, and is measured in the archaelogical record by buildings, temples and statues. One of Ramses’ principal icons, known now as the Ozymandias Colossus, would have towered 50′ were it still standing. As it is, the toppled colossus is broken and in decay, and is thought to have inspired Shelley in the penning of his sonnet. You can find the Hands of Ozymandias for yourself at the Ramesseum, the mortuary temple complex for Ramses II that is part of the sprawling necropolis of ancient Thebes, located across the Nile River from modern-day Luxor, Egypt.

Interestingly, Shelley’s friend Horace Smith wrote a similar sonnet, dealing with the same subject, and published it in the same magazine just a month later. Compare and contrast, if you will, Smith’s version with Shelley’s:

In Egypt’s sandy silence, all alone,
Stands a gigantic Leg, which far off throws
The only shadow that the Desert knows:
“I am great OZYMANDIAS,” saith the stone,
“The King of Kings; this mighty City shows
“The wonders of my hand.” The City’s gone,
Nought but the Leg remaining to disclose
The site of this forgotten Babylon.
We wonder, and some Hunter may express
Wonder like ours, when thro’ the wilderness
Where London stood, holding the Wolf in chace,
He meets some fragments huge, and stops to guess
What powerful but unrecorded race
Once dwelt in that annihilated place. — Horace Smith