By adminAugust 9, 2011Sierra Nevada
No Comments 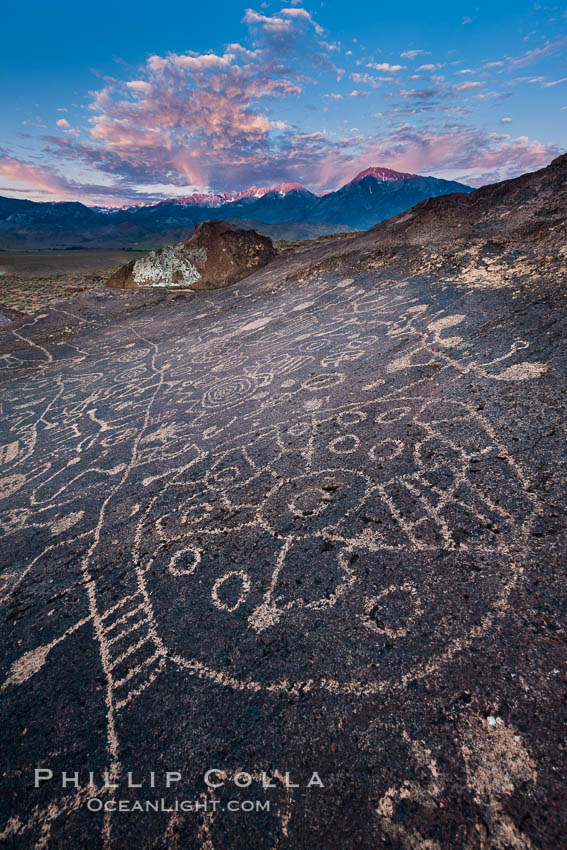 Sky Rock petroglyphs near Bishop, California, sunrise light just touching clouds and the Sierra Nevada. Hidden atop an enormous boulder in the Volcanic Tablelands lies Sky Rock, a set of petroglyphs that face the sky. These superb examples of native American petroglyph artwork are thought to be Paiute in origin, but little is known about them.
Image ID: 26979
Location: Bishop, California, USA

Sky Rock is a special place, indeed. It was fascinating to see it firsthand and consider the artist who, probably many hundreds of years ago, composed the intricate petroglyph forms. While looking at it we realized very few, if any, of the shapes were recognizable. In the way that other famous artists in history have done, Sky Rock’s talented creator produced a work that captivates and intrigues and will outlive him for centuries – a distinction that most artists (and photographers) hope to achieve.

Thanks for looking! I have a few more Sky Rock Petroglyph photos. Also see my gallery of California photos and Sierra Nevada photos.