Distance, Perspective and the Out-Of-Focus Background

I went down to La Jolla this morning to photograph brown pelicans (Pelecanus occidentalis californicus) with my friend Garry McCarthy. My plan was to test the sharpness of my 500 with a 2x teleconverter** so I had a pretty long setup. Unfortunately, when I arrived I found that two photographers had already proceeded to sit on the lower shelf before sunrise. “Uh-oh” I thought, knowing this would basically screw the photographic opportunities for everyone (except perhaps the two guys pushing the birds, depending on what they were after). One of the two is exceptionally talented and experienced and should know better than to plant himself right where the pelicans try to land. In my estimation (I have been watching and photographing these birds at this location for about 25 years) this would cause most of the pelicans approaching from the ocean to swerve away and choose another area on which to land. Indeed, that is what transpired over the next 45 minutes as the sun lit the bluff, the pelicans appeared on the horizon in twos and threes, approached to within 200 yards or so and then veered west to land at the bluff 150 yds away along Coast Blvd. The top of the pelican bluff is normally chock full of preening pelicans shortly after sunrise, providing nothing spooks them. It is also, in my opinion, where the best portrait and flight photographs are made and is where the pelicans seem to be most comfortable and approachable after they have settled in and begun preening. It was empty this morning. It was dismaying to realize that one of the two was a pro who appeared to have a client with him. If that was indeed the case he was actually teaching his student this behavior by example. Photographers: please don’t push the birds on the bluff here, they are on the cliffs for reasons that have nothing to do with our photography — to rest and preen — and they need some space. But I digress…

In the course of reviewing the morning’s catch, I realized I made a series of images that illustrates well how increasing background distance relative to the subject serves to throw the background increasingly out of focus (OOF), resulting in that pleasingly smooth OOF background that wildlife photographers love. There is nothing cutting edge about these static pelican portraits, but they are tack sharp and show incredible detail in the eye and in the richly-colored throat and plumage feathers that California pelicans exhibit so strikingly each winter. All three of these images were shot in the same light, with similar background conditions (moderately smooth ocean in direct sun) on the same pelican, at the same distance with the same lens (500mm w/ 1.4x teleconverter) and f-stop (f/11), within a few minutes of each other. What changes most profoundly from one image to the next in this series is how the background (ocean water) is rendered behind the bird. From one image to the next, the ratio of the background distance to the subject distance increases by about an order of magnitude. In the first image, which is shot looking somewhat down on the pelican, the background ocean water is about twice the distance of the bird. There is some detail seen in the water; at least it is recognizable as ocean ripples. In the second image, I am lower to the water but have maintained the same distance to the bird. By being lower, I have caused the background to now be more distant, let’s say 5 to 10 times as far as the bird. This leads to an image that differs from the first primarily in a softening of the background while the pelican appears nearly the same as in the first image. In the third image, cropped somewhat and with added compression of a 2x converter, I shot from my knees so that the ocean background is now just below the horizon, as far as I could make it without showing any horizon or sky, effectively at infinity. The subject is a bit closer as well. This combination results in a ratio of background to subject distance that is far greater than that in the second image, perhaps 100 or 1000. At this point, the background has essentially no discernible detail and becomes a nearly smooth wash of blue color.

This notion — that increasing the ratio of background distance to subject distance softens the background — applies in countless situations: nearby bird and distant forest at Bosque del Apache, nearby whale fluke and distant ice in polar regions, nearby bikini-clad model and distant seacliffs in Malibu, nearby bug and distant foliage in insect photography. This is a fundamental idea and there is nothing groundbreaking in my comments, but its helps me to think about such things explicitly from time to time so I can better put them to use the next time I am out shooting. 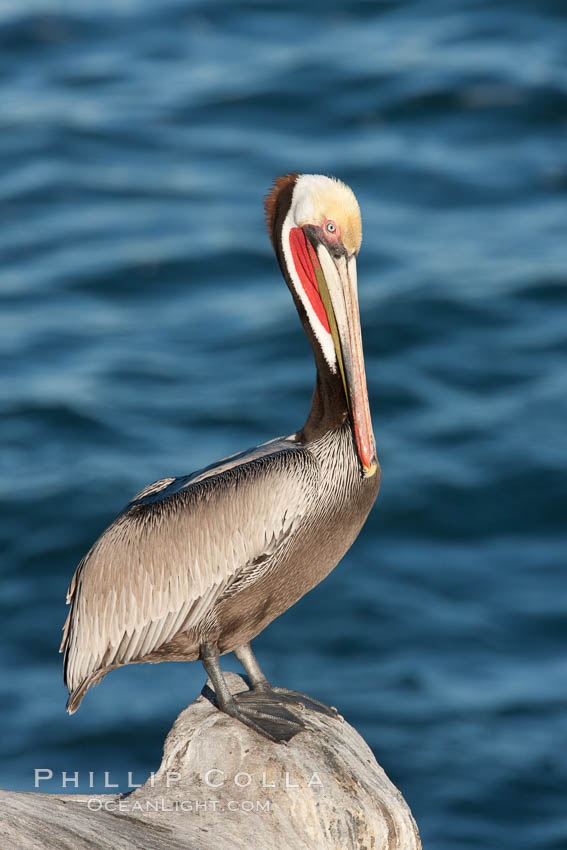 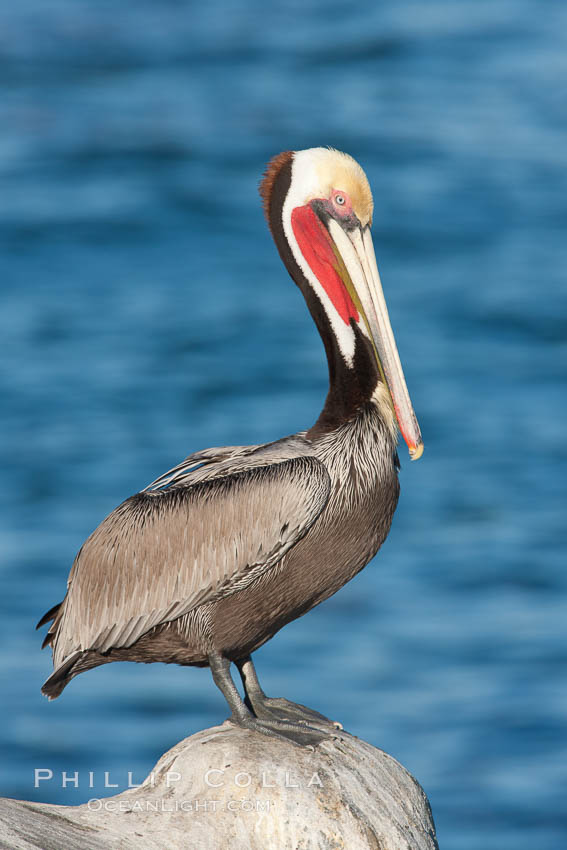 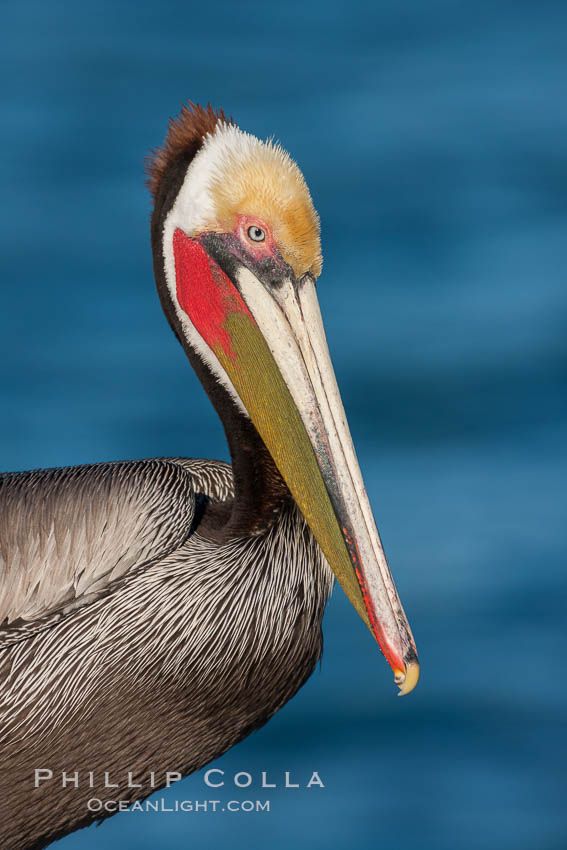 **As I hoped: sharpness became tack at effective f/11 and got even better at f/16, meaning I must shut down a minimum of one stop and preferably two stops from wide open for a 2x converter. Similarly, for real sharpness I have found I need to stop down one stop for a 1.4x converter. (In contrast, with my 300 f/2.8 I can shoot wide open with a 1.4x converter and usually achieve a task sharp image.) By “tack” I mean sharp enough that I would be happy to submit the image to any publisher for reproduction at any size.

I’ve compiled my thoughts on photographing California brown pelicans in La Jolla in a PDF article.

If you like these photos, you can also see lots more blog posts from past sessions photographing California brown pelicans in La Jolla.