Photo of a Grizzly Bear in Snow

A few days into my Yellowstone National Park trip I found the ursine suspect in a double murder case. I was not looking for bears, rather just cruising around and admiring all parts of the park, and I was lucky to stumble upon him and get off a few good photos . I continued to explore the park on my own for another week but saw no more bears. My dad and daughter then arrived and I shifted the emphasis to wolves and bears after having spent the better part of a week watching the elk rut. We made several trips together through the Lamar hoping to see bears and wolves but were not having much luck, although we had seen most of the other charismatic animals including coyote, moose, elk, geese and swan. Finally, on our last full day in the park, before sunrise as we drove to the Lamar from Mammoth, at exactly the same place that I had seen it previously, we found the fratricidal grizzly. Snow had been falling the previous two days so he was quite easy to spot from far away even in the dim light, otherwise I might have missed him entirely (my co-pilot and navigator were both half asleep and of no help in spotting wildlife that early in the morning). He was strolling up from the river again, across a broad open field of white snow-frosted sage. We got a very good look at him, the best view my dad and daughter had ever had of a grizzly. This photo was taken only a few hundred yards from the other one. The entire time we were watching this fellow, the Agate wolf pack was above us on the ridge howling. A few minutes after this bear had sauntered off into the woods, we drove a short way up the road and saw the Slough Creek pack, howling back at the Agates. All this in the space of perhaps 2 hours. It was quite a morning. 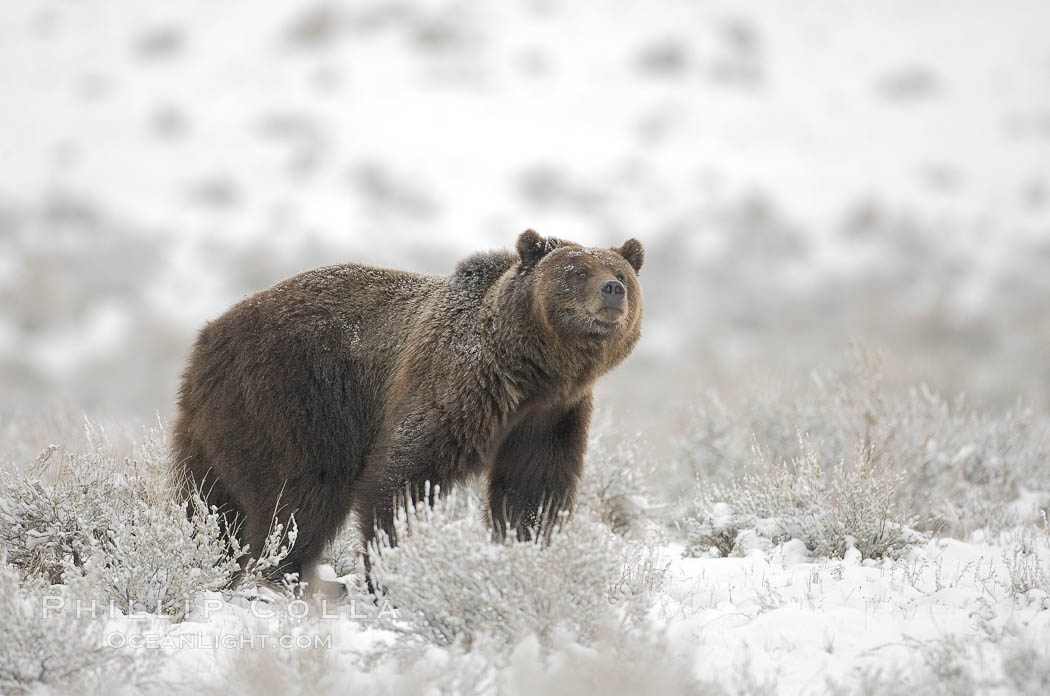