After spending a few days in the Madison River area looking at the elk (Cervus candensis) herds there, I drive over to Mammoth Hot Springs. The bulls are bigger and have nicer antler racks there, so I have heard, but they need to be outside of town to get good images. (Many of the elk in Mammoth are literally in town, among the buildings, cars and people. A curiosity but not what I am looking for when taking photos.) I get there in late afternoon after having spent an hour with a inquisitive coyote at Sheepeater Cliffs. I spot some guys with long camera lenses on a hill just east of the town, so I park and walk up to say hello and see what they are looking at. I am the Yellowstone National Park version of a barney: bright red jacket, bright blue rain cover on my telephoto lens, flip flops, jeans (almost chose shorts) and a Diet Coke. Might as well paint “California” across my back in giant letters. These guys are all dressed in camo jackets, khaki or camo pants, hunter-looking boots, with camo covers for the long lenses. They look like this is their back yard (probably is). They tell me they are keeping tabs on a nice 6×6 bull with a harem, all of which are resting in some nearby sage. I say thanks, sit down near them, read my book and wait on the wind blown hill for something to happen. After a half hour or so the bull rises, as does his harem. They spend a few hours moving around the area, toward the NPS housing for a while, back towards us, then across the road and up onto some hills rising above us. The bull elk bugles frequently, and loud. He has some small, fresh wounds around his neck, probably acquired in a confrontation with another bull for rights to claim the harem. I listen to the experienced photographers discuss the bull’s behavior, where they think it will go, etc. — they clearly have been watching him for some time. One photographer in particular seems to know, just by watching the bull’s posturing in relation to the harem and the location of other nearby bulls (some bachelors for the moment), where it will move next, and consistently puts himself in position for good photography angles. By paying attention to him I manage to snag some nice images, elk portraits I have never had an opportunity to shoot before. He kindly offers me a few tips. Once the sun has dipped enough to end the shooting I offer him my thanks and get back to my car to get some food at the hotel in town. 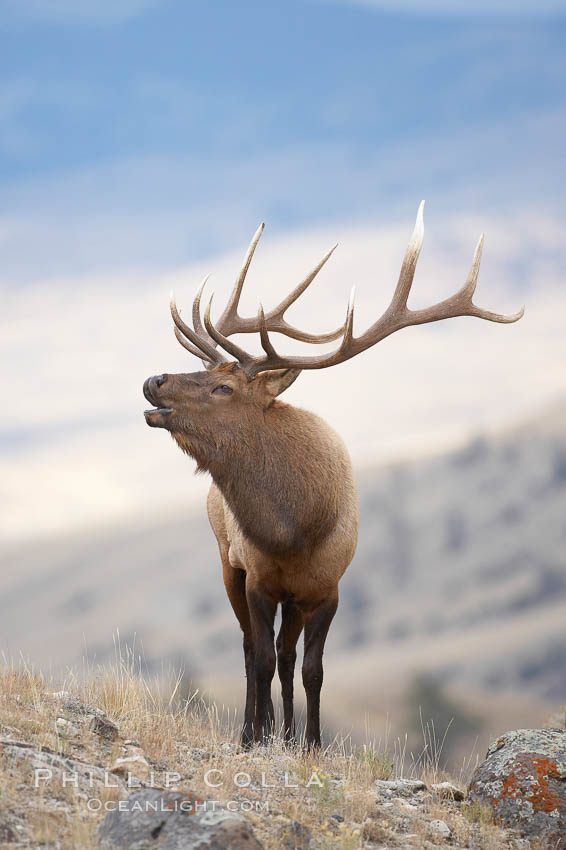 Photo of a Moose in Snow