Morning Glory Pool, one of the most popular and beautiful pools in Yellowstone National Park, earned its name in the 1880’s due to its deep blue coloration and likeness to the Morning Glory flower. Morning Glory Pool was once reached by car, bringing it fame as one of the first features visitors would see entering the Upper Geyser Basin. Over the years visitors tossed coins, trash, sticks and rocks into the pool, causing its vent to clog and the flow of water to decrease. This prompted the temperature in the pool to lessen, causing the pool’s deep blue color to fade and allowing the red and yellow algae that formerly only survived at the fringe of the pool to grow toward the center. The road has since been removed and now Morning Glory Pool is reached by a flat 1.5 mile flat walk from the Old Faithful Inn area. According to the folks at GOSA, Morning Glory Pool has on rare occasions been known to erupt as a geyser, leading to some failed efforts in the past to deliberately induce eruptions in an effort to clear the pool’s vent. Morning Glory Pool is part of the Morning Glory / Riverside group of geothermal features. A visit to Riverside Geyser, which is one of the most predictable geysers in Yellowstone National Park, can be easily combined with a viewing of Morning Glory Pool. 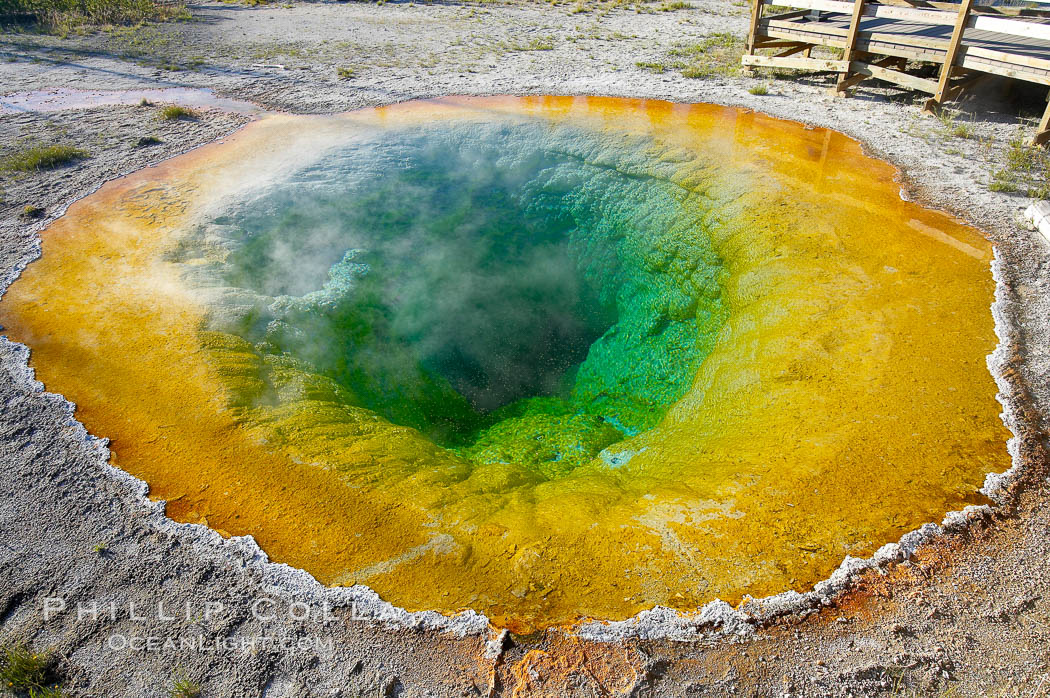 Morning Glory Pool has long been considered a must-see site in Yellowstone. At one time a road brought visitors to its brink. Over the years they threw coins, bottles and trash in the pool, reducing its flow and causing the red and orange bacteria to creep in from its edge, replacing the blue bacteria that thrive in the hotter water at the center of the pool. The pool is now accessed only by a foot path. Upper Geyser Basin.
Image ID: 13352
Location: Upper Geyser Basin, Yellowstone National Park, Wyoming, USA