Discarded plastics and styrofoam are destroying our environment. They wreak havoc especially hard on marine wildlife. I recently came across a textbook example of how such trash can injure and kill in the form of this unfortunate brown pelican (Pelecanus occidentalis californicus) which is entangled in what appears to be a plastic bag. I am reasonably certain it is the lightweight sort normally used at grocery stores. I have a good idea of how this predicament came to pass. Plastic bags blow in the wind until they reach the ocean, at which point they float. As these translucent bags drift along on ocean currents, they look like food to many marine animals. Pelicans typically dive from high in the air onto the prey, piercing the water like a spear. I think this pelican saw the plastic bag as it was foraging over the ocean, thought that the bag was some form of food, made a dive into the water and speared the bag with its beak. The pressure of the pelican driving into the water pushed the bag over the head and down the neck of the pelican, were it now sits like a deadly necklace. It appears that the pelican has, during its preening, bitten away quite a bit of the bag, and hopefully will make enough further progress on the bag that it eventually breaks free and the pelican is liberated. (I have a few other photos of marine animal entanglement, including a sea lion with monofiliment fishing line wrapped around its neck.) 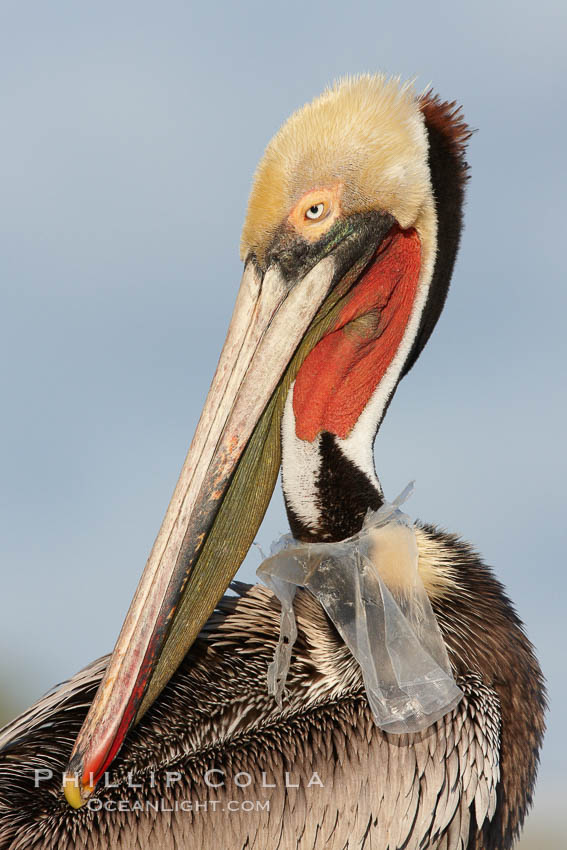 A California brown pelican entangled in a plastic bag which is wrapped around its neck. This unfortunate pelican probably became entangled in the bag by mistaking the floating plastic for food and diving on it, spearing it in such a way that the bag has lodged around the pelican’s neck. Plastic bags kill and injure untold numbers of marine animals each year.
Image ID: 22562
Species: Brown Pelican, Pelecanus occidentalis, Pelecanus occidentalis californicus
Location: La Jolla, California, USA

See more brown pelican photos as well as our Guide to Photographing Pelicans in La Jolla.