This week I licensed a photo of this unfortunate brown pelican (Pelecanus occidentalis) entangled in what appears to be a grocery bag to an environmental education initiative, to illustrate the tangible effects of trash and debris on the marine environment. I originally posted about this bird in 2009. I believe the pelican speared a plastic grocery bag floating on the water, mistaking the plastic bag for prey. I would have loved to see the bird captured by wildlife rehab experts so that the bag could be removed, but the pelican was in a position that would have been difficult to approach successfully. Those parts of the bag that the pelican could grasp with its bill appear to have already been pulled away and I believe the remainder would have disintegrated in sunlight, weaked and fallen off soon. Hopefully the bird ingested no pieces of the bag, since plastic is often found clogging the digestive tracts of many species of seabirds. 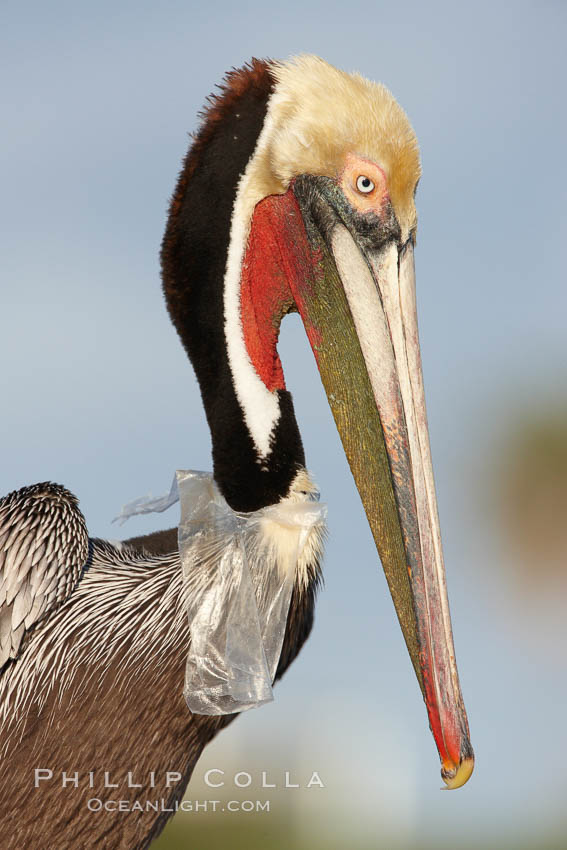 A California brown pelican entangled in a plastic bag which is wrapped around its neck. This unfortunate pelican probably became entangled in the bag by mistaking the floating plastic for food and diving on it, spearing it in such a way that the bag has lodged around the pelican’s neck. Plastic bags kill and injure untold numbers of marine animals each year.
Image ID: 22561
Species: Brown pelican, Pelecanus occidentalis, Pelecanus occidentalis californicus
Location: La Jolla, California, USA