Western Grebes (Aechmophorus occidentalis) and Clark’s Grebes (Aechmophorus clarkii) exhibit some of the most elaborate and impressive courtship behavior found in the animal world, including various vocalizations, swimming movements, the exchange of nesting material (“weed ceremony”) and, most notably, the “rushing ceremony”.  When grebes rush, they rise entirely out of the water and literally run across the water with their wings held back and heads held high.  With their webbed feet beating the water’s surface as quickly as 20 times each second, the grebes rush across the water for 60′ (20m) or more. As they rush the patter of their feet hitting the water can be heard a long way across a lake.    What’s even more impressive is that this is not a solitary behavior.  Rather, a courting pair will perform the rushing ceremony in synchrony, striding across the water within inches of one another, side by side.  Occasionally a pair of males will rush together (some sort of competition perhaps?), or a mixed-gender group of three or four grebes will go for it.  And even more rarely, two grebes of different species may engage in the rush alongside one another. 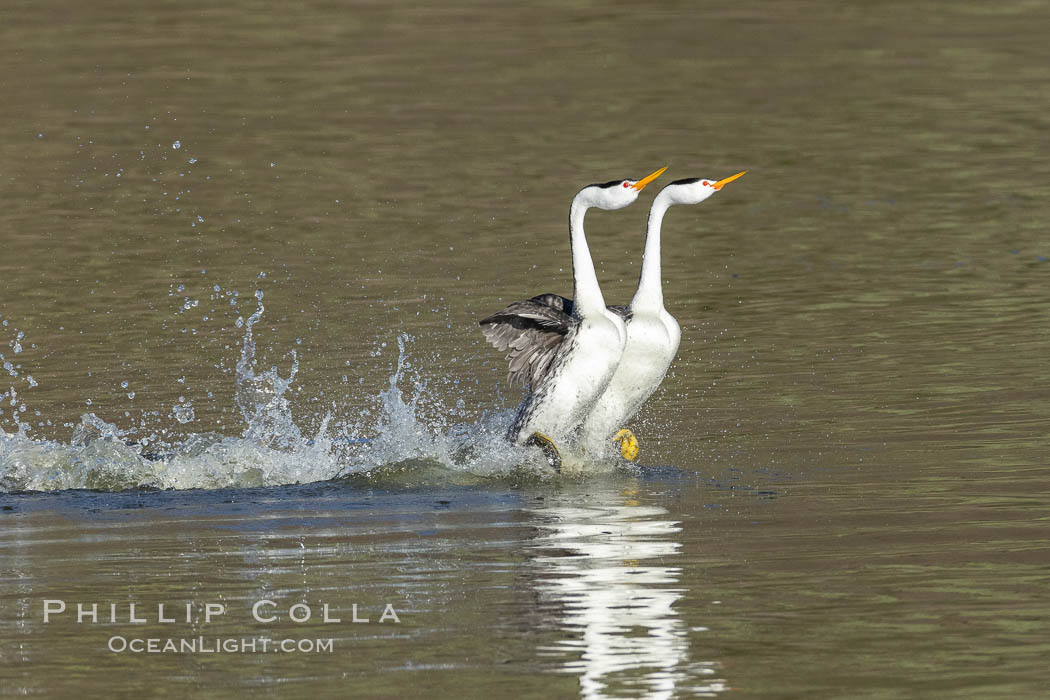 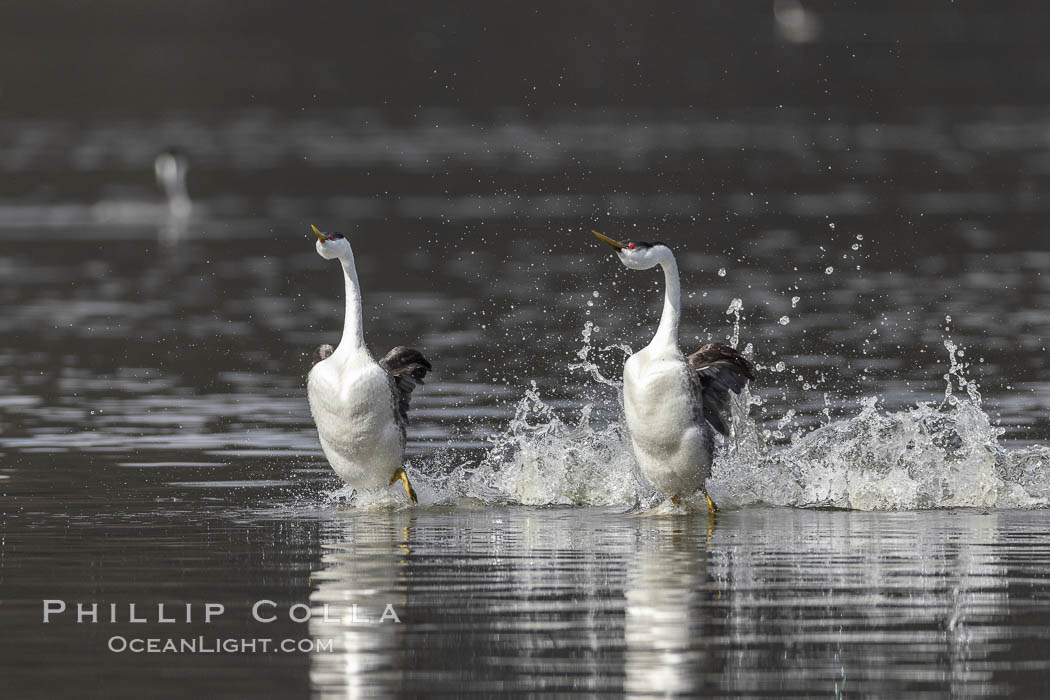 Often over the last few months I found myself at the water’s edge of Lake Hodges in the northern inland part of San Diego County early in the morning, hoping to photograph rushing grebes with low, warm morning light on a still lake.  It is quiet, chilly and peaceful as the sun comes up over Rancho Bernardo and touches the lake. Various vocalizations of grebes, hawks and pelicans can often be heard before the fog has burned off the lake enough for the birds themselves to be seen. Krisztina Scheeff , a professional photographer, guide and grebe expert, offered me very helpful advice about the grebes on Lake Hodges, the most important being how to recognize when grebes are going to rush.  What usually precedes a rush is a behavior known as ratchet pointing, in which two grebes face one another, lower their heads and produce a clicking, ratchet-like sound.  This behavior gives the photographer a moment to focus and compose before the grebes suddenly rise up and rush across the water.

Western Grebes and Clark’s Grebes look similar to one another, and are found in mixed aggregations on Lake Hodges.  Lots of guide books and web pages can be found describing the differences, but I find the most useful diagnostic to be the color around the eye of the grebe: on Clark’s Grebes the red eye is surrounded by white, while on Western Grebes the red eye is surrounded by black or gray.

Some mornings I have observed 50 to 100 rushes in a few hours, but because they were often too far from shore for me to photograph effectively I got out on the lake with Brian Caldwell who operates photo tours  on Lake Hodges with a small, quiet boat. He knows the lake and its wildlife and in the course of our morning on the lake he filled me in the history of Lake Hodges, the grebes that are found there, and how they are impacted by municipal water use policies.  We saw a distant bald eagle, the first I have seen in the region although there are a number scattered throughout the county. We saw many grebes, and many rushing ceremonies of which I was able to photograph a few at reasonably close range.

I look forward to next winter and spending more time watching and photographing these marvelous birds and their amazing courtship.  Cheers, and thanks for looking. 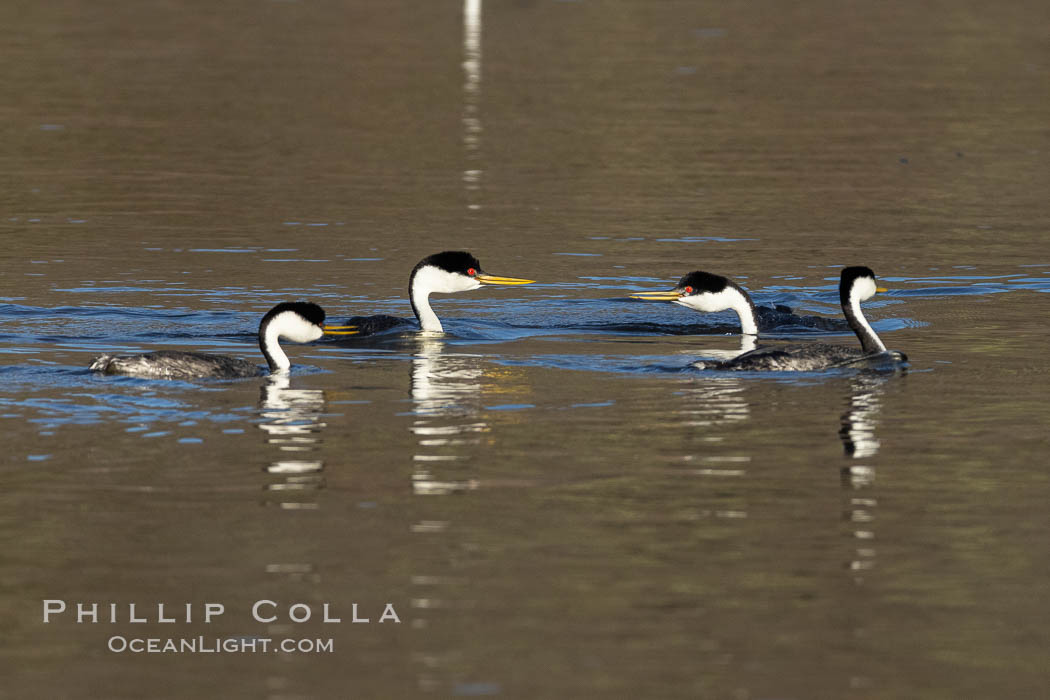 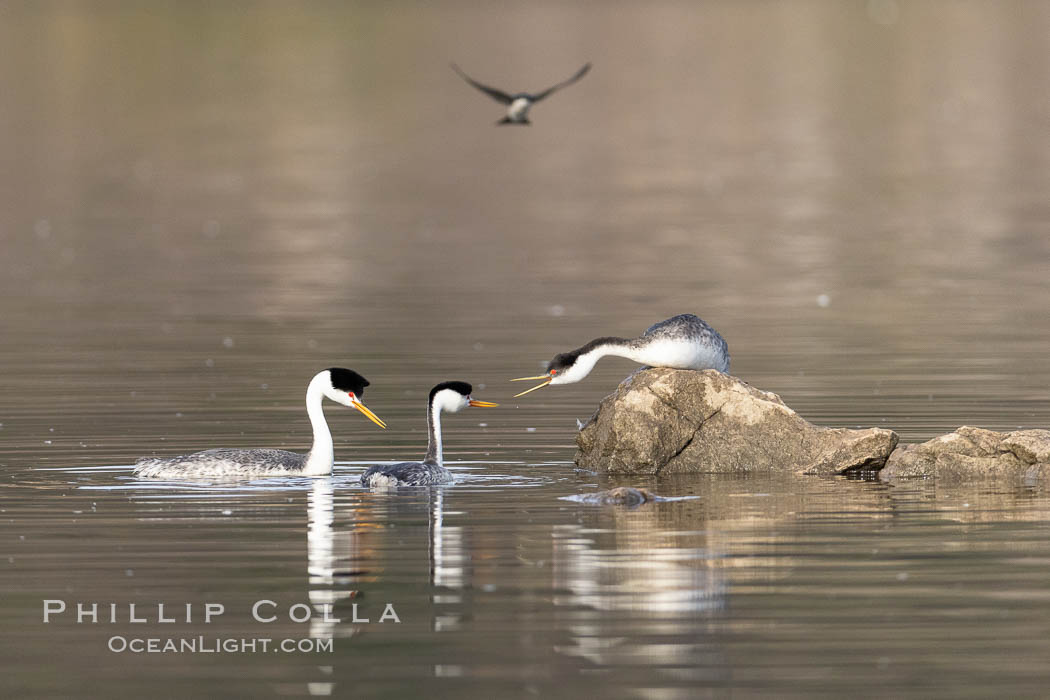 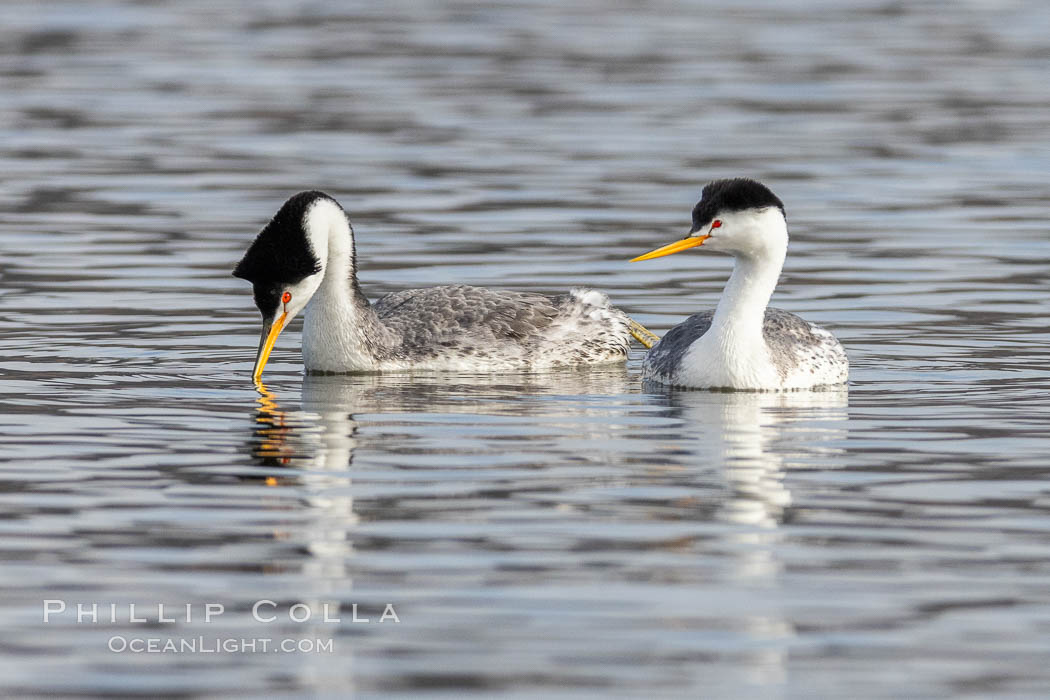 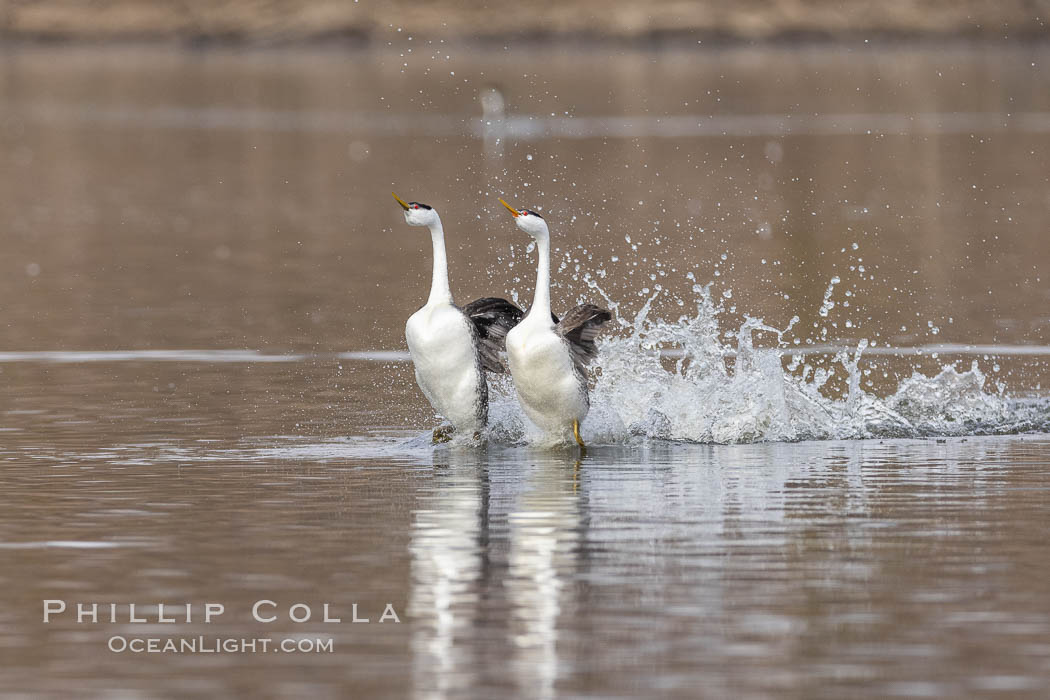 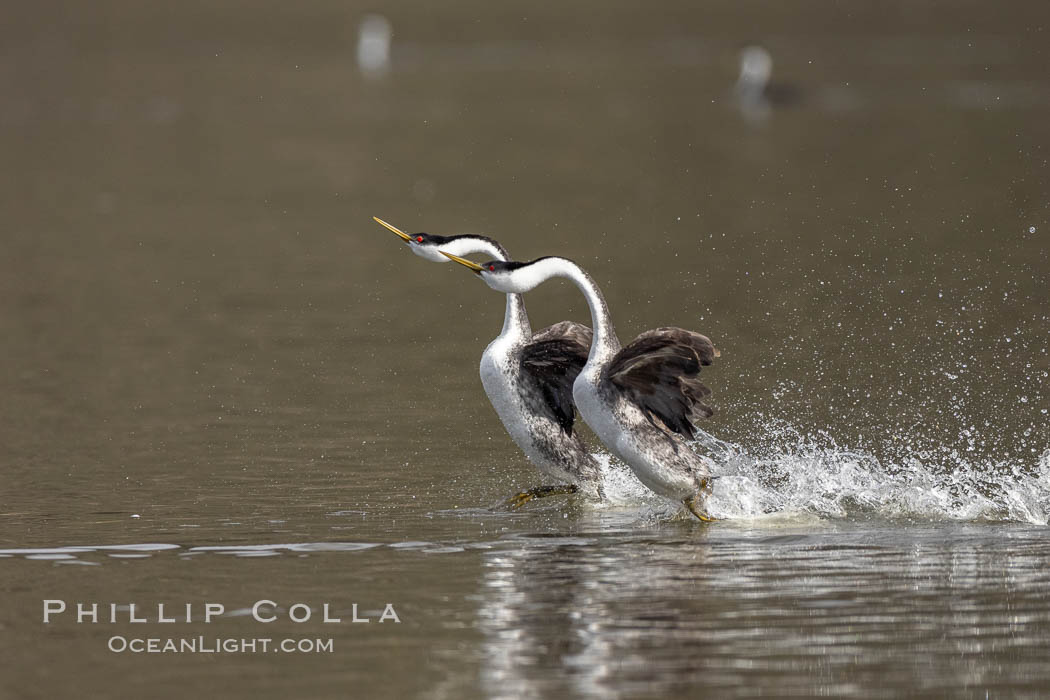 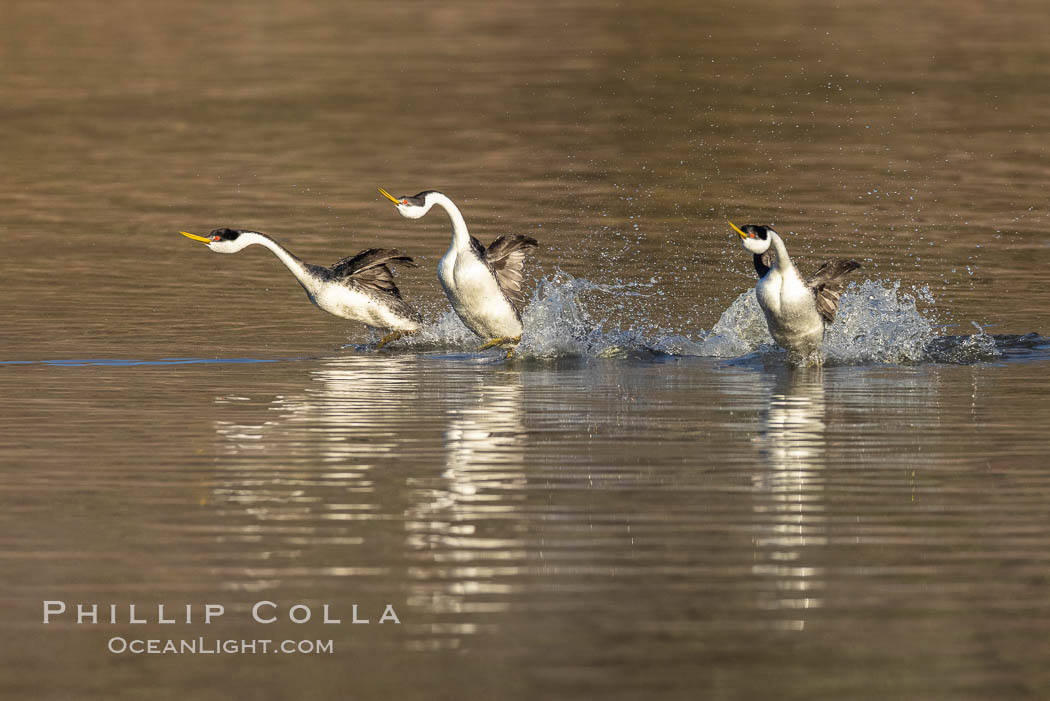 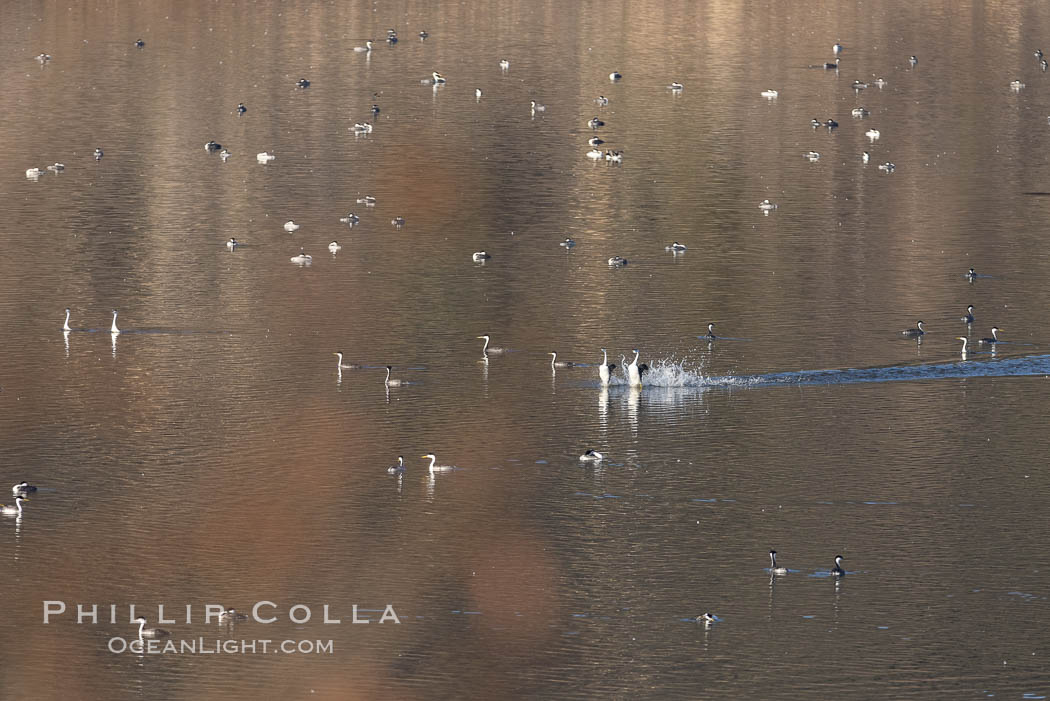