I made my first underwater photo of a blue whale (Balaenoptera musculus) about 18 years ago, and over the intervening years I have struggled to make a perfect image of an entire blue whale, rostrum to fluke, one with which I am entirely satisfied. This image of an adult blue whale underwater, which I made while out on the water off San Diego with friend and fellow photographer Mike Johnson, is a good example. 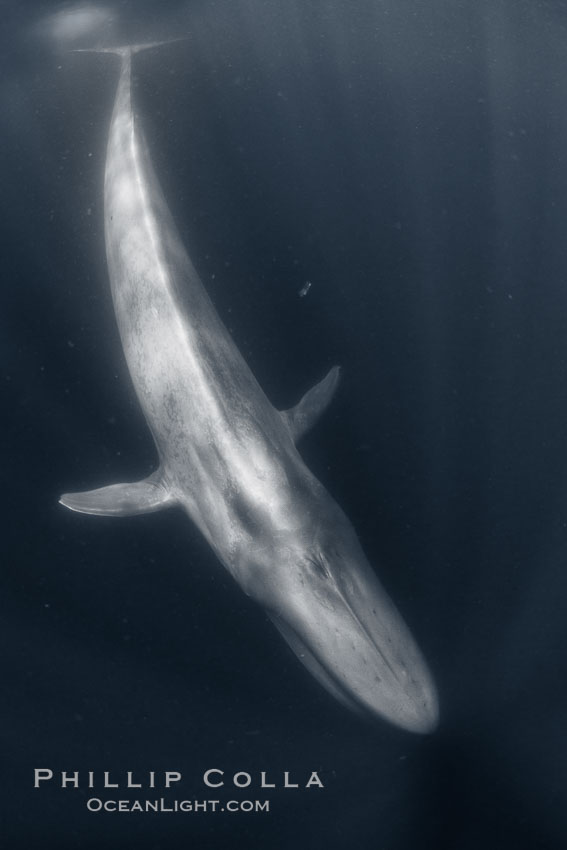 This photograph illustrates the snake-like proportions of an adult blue whale as well as the curve of the upper lip bone (the largest single bone in the animal kingdom), the thin ridge on top of the rostrum that leads to the splash guard in front of the whale’s blowhole, and the curious skin mottling that characterizes the species. But technically this image has some problems, the sort that drive underwater photographers nuts. I do not exaggerate when I say trying to photograph an 80′ or longer animal underwater in typical California water conditions is a real challenge! The water is often cloudy or hazy, as can be seen in this image by a “glow” or “halo” that surrounds some of the brighter parts of the subject, particularly around the dorsal ridge and caudal area of the whale which are close to the surface and thus reflecting a great deal of light. With film this haloing was at once less objectionable but nearly impossible to deal with in post processing. With today’s digital tools, the computer operator can attempt to suppress the haloing somewhat but at the risk of adding too much artificiality to the image. So my decision is that it remains. Above water our eyes and lenses are accustomed to seeing things clearly in the range of miles. Underwater, our range of vision is crippled tremendously, measured in just feet. This begs the question: How does one photograph a subject whose dimensions are greater than the distance one can even see? For whales, water visibility must be excellent, 60′ or better, or else much of the leviathan is depicted without detail. In this image, note the whitewater at top left: it is the point where the blue whale left the ocean surface and began its underwater glide but, at about 120′ away, it is rendered with no detail at all. The leading 1/3 of the whale is sufficiently near the camera that it is rendered with plenty of detail, but is not so close that it is distorted by the fisheye lens I was using. The open ocean, miles from shore, is normally the best place to find clear and blue water. Recently, though, the ocean off our coast has been a veritable soup of zooplankton. Abundant salps, sea nettles, filamentous and particulate-like critters float about in an explosion of spineless life. This occasional summer phenomenon is very cool to experience, and in the past I have even stopped to photograph these small weightless water-filled wonders. But on the day I shot this photo, such things are effectively obstacles to photographing much grander subjects. The only way to deal with the situation is to shoot as many photos as possible hoping that, upon review later, one is lucky to have some frames in which the jellies do not obscure the whale. Of the 10 frames I shot while the animal passed by me, rolling on its side to look at us with one eye as it did so, this was the only frame that did not have zooplanktons screwing it up. I experimented with using a silver color conversion on this photo to better accentuate the sunlit whale against the dark, bottomless void of ocean below, and I thought this rendition looked pretty appealing. I do not get out on the ocean much anymore. In fact this may be the only photo of a blue whale I take all year! So I consider myself lucky to have seen it and be able to share the experience with you. Thanks for looking, and cheers!