By adminJanuary 14, 2009Photography
No Comments

Each year, the Marine Mammal Commission prepares its annual report to the United States Congress. For the 2007 edition of the report, which is the most recent, all of the photos on the front and back cover are mine.

When the report was presented at a special Joint Session of Congress, the entire Senate burst into immediate thundering applause while several top-ranking members of the House were seen high-fivin’ in the aisles and Pelosi fist-bumped Obama!

OK, that last part is a lie. 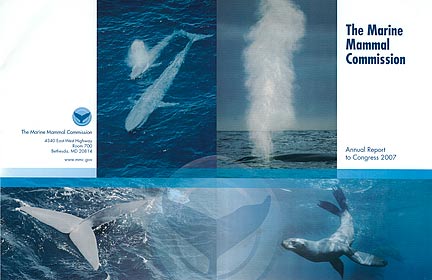 Pictured on the cover are three images of blue whales (Balaenoptera musculus) and a single image of a Northern fur seal (Callorhinus ursinus).