The first morning of my recent roadtrip around northern Arizona and southern Utah with a few old diving buddies found us at the Toadstool Hoodoos a few hours before dawn. Garry McCarthy is always thinking of ways to creatively photograph the night sky, and on this trip he suggested photographing the Milky Way above these hoodoos. Garry led us stumbling up the sandy wash that leads to these sandstone spires in pitch darkness. The trail is quite short and is physically easy, but I was half asleep and had no idea where I was relative to, well, anything, so I was grumbling a bit along the way. As it happens, we were just within the southern edge of Grand Staircase – Escalante National Monument, a place I had wanted to visit for years. Eventually Garry and Don, who had both been to the Toadstool Hoodoos before, announced “we’re here.” Huh? I was baffled, standing in the dark able to see only the dirt at my feet. After a while my eyes adjusted so that I could discern large forms jutting into the night sky. We used our tiny hiking headlamps to illuminate the surrounding sandstone relief. I then understood what Garry had envisioned and planned for: a sublime scene in which the Milky Way was arching over a family of sandstone spires, one taller than the rest. Wow! We spent 45 minutes photographing the view, experimenting with compositions and lighting before the approaching sunrise overwhelmed the pale light of our galaxy. The air was quite still and cold and the only sound to be heard was us fumbling around in the dark with our cameras and blinding one another with our lamps. Naturally, the occasional swear word was said but gradually we figured out what worked as far as exposure settings and lighting. When we first arrived at the hoodoos I had no sense of what the larger surrounding area was like but the location — a variety of hoodoos and tortuously eroded sandstone formations situated below the line of Rimrock Cliffs looking down on us from the north — was gradually revealed to us over the next 90 minutes as starlight gave way to clear skies and one of those keen, brilliant sunrises that one gets in the desert southwest. It was a great beginning to a productive and fun trip. If you like this image, please see my website devoted to my full collection of Landscape Astrophotography images. 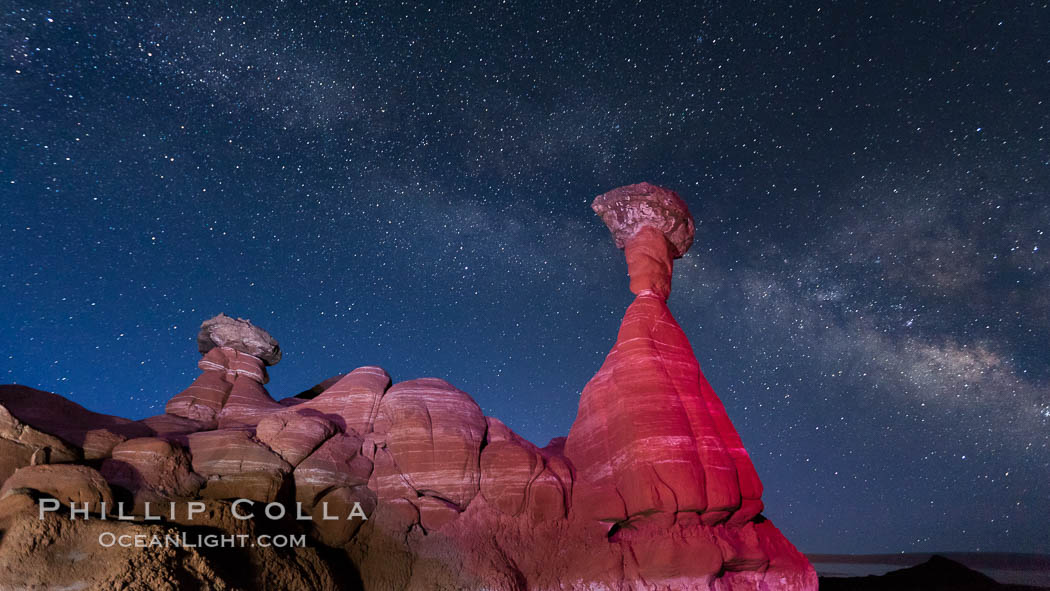 As I used to do in the film days, I bracketed exposures as much as possible since it was difficult to judge the accuracy of such an extreme exposure with just the histograms on our cameras. Out of the many exposures I took I found two that I was happy with, including this one.