The Perseid meteor shower occurs each August, peaking on the evenings of August 12 and 13. It happens because the Earth is plowing through the trail of dust left behind by comet Swift-Tuttle. The Perseid meteors are named for the constellation Perseus in the northern sky, from which the meteors appear to radiate. When sand- and pea-sized debris left behind by Swift-Tuttle collide with our atmosphere at about 37 miles per second, the gases in our upper atmosphere are superheated and glow, often with colors. That’s what I wanted to photograph, over what has become one of my go-to places to make astrophotographs, Arch Rock in Joshua Tree National Park. I photographed from about 10pm until 3am, seeing hundreds of meteors all over the night sky and capturing about 25 on my camera. 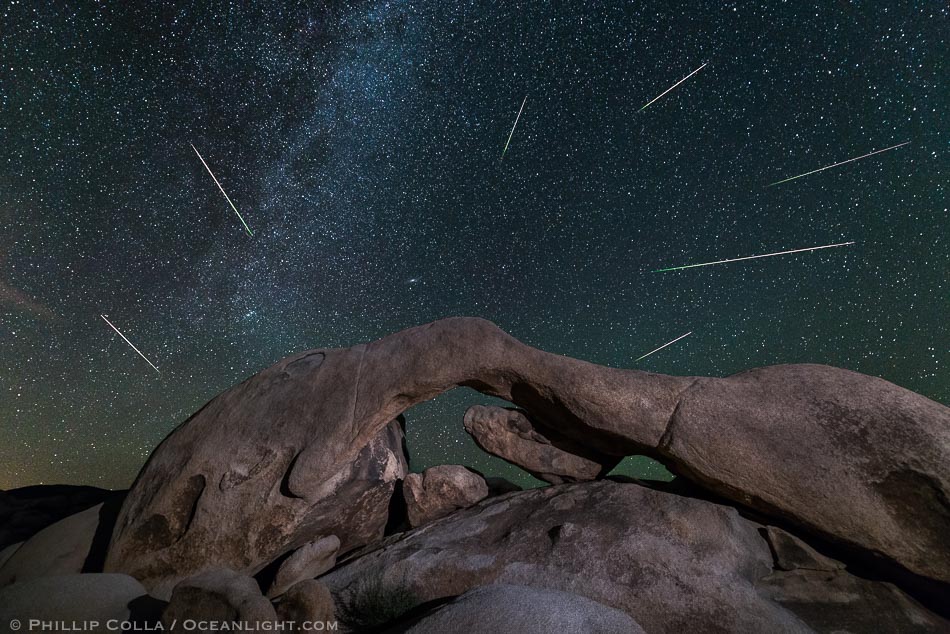 I was last photographing in JTNP with my buddy Garry in April, when we elected to photograph the total lunar eclipse over Arch Rock. We were alone then, it was great and easy to make good photographs. When I was at Arch Rock a few nights ago for the Perseid meteors, Arch Rock was crammed with people. Honestly I have never seen it so crowded, it was like Mesa Arch at dawn. A lot different than when we first photographed Arch Rock under the milky way 5-6 years ago and astrophotography was not as popular as it is now. A few nights ago, while the Perseids were flying overhead, many of the folks at the arch did not speak English. This made it impossible for everyone to be in sync, working together to keep the light pollution to a minimum and light the arch while balancing the star light. No problem, I just waited until everyone was done, and managed to sneak in a few exposures of the arch and milky way above it when noone was flashing a mag light, or red “night” lights or cylume sticks around. I think everyone photographing eventually got a good image of the arch and the milky way, but it took a while. As for recording the meteors — that’s the easy part: I just let my camera take photos of the north-eastern sky for hours (14mm, f/2.8, ISO 6400, 10 seconds) with a cable release locked down, and I kicked back in the bed of my truck and watched the show. (Note: the images are rotated in post to properly account for the rotation of the stars as the night goes by, so that they appear in their proper orientation relative to the milky way and Perseus in the final photo.)

What is depicted here is Arch Rock, with the northern arm of the Milky Way visible rising above to the left. The Andromeda galaxy is seen just above and to the left of the top of the arch, like a large star. The constellation Perseus, from which the meteors typically appear to emanate, is behind the arch and just rising above the horizon. What I found interesting is that virtually all of the meteors that I recorded have green coloration at the beginning of their tail, ending in white or light yellow. I don’t recall seeing that when I photographed the Perseid meteor shower over Half Dome in Yosemite a few years ago. OK, whatever. Cheers, and thanks for looking!