Sky Rock and Moonlight, Bishop, California. (See also my photograph of Sky Rock at Dawn, Bishop, California and a gallery of other Sky Rock Petroglyph photos.) The Sky Rock Petroglyphs sit atop of an enormous volcanic block. The petroglyphs — dozens of them in many shapes and forms — face the sky, thus lending Sky Rock its name. My understanding is that Sky Rock’s orientation toward the heavens is unusual, but also curious is that this set of petroglyphs sits alone, isolated some 5+ miles from the rich Chalfant, Chidalgo and Red Rock petroglyph collections. Chipped into the rock, through the darker “desert varnish” that typically covers the exterior of such rocks, the Sky Rock Petroglyphs expose the lighter-colored rock underneath. The history of Sky Rock is not clear to me, although I have seen a number of published suggestions that the Sky Rock Petroglyphs were perhaps created by ancestors of what are today known as the Owens Valley Paiute (or Shoshone-Paiute) people. 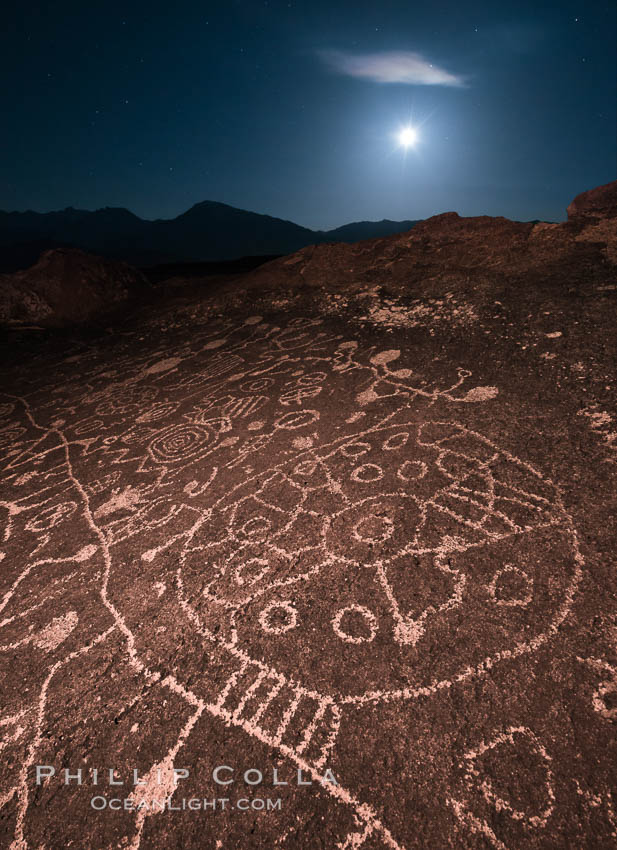 Sky Rock at night, light by moonlight with stars in the clear night sky above. Sky Rock petroglyphs near Bishop, California. Hidden atop an enormous boulder in the Volcanic Tablelands lies Sky Rock, a set of petroglyphs that face the sky. These superb examples of native American petroglyph artwork are thought to be Paiute in origin, but little is known about them.
Image ID: 28505