Twice each year, the sun sets perfectly centered in the long thin window of the Scripps Research Pier pilings. Photographing this event is frankly rather formulaic and straightforward, to the point that people pack the narrow space on the shore between the pier pilings well before the sunset to ensure they have a “spot” when the sun lines up. It’s not a secret photo op nor is it spontaneous, but it is a striking and fleeting sight to see. I met a couple photographer buddies for one of the lineup evenings in 2013 and managed to photograph it reasonably well: Scripps Pier Sunset Perfect Solar Alignment, La Jolla, San Diego, California. This year I gave the matter some thought and realized I just couldn’t bring myself to do the same photo over again, especially with the crowd that forms. How to do it differently and with at least a modicum of spontaneity and physical challenge? 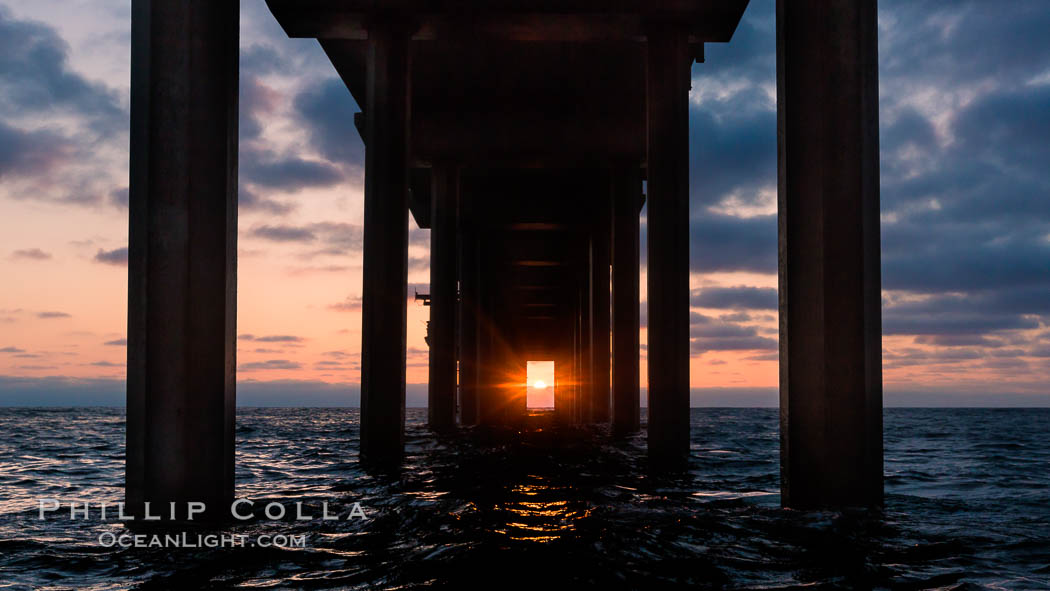 After pondering it for a while I realized leaving the shore was really the only option. I spent three afternoons recently photographing the pier using one of my water cam setups — a custom-made surf housing for my Canon 5D Mark III — along with a few pieces of simple but secret equipment to make it all possible. Shooting it from the surfline is pretty tough, the pier does not move of course but the water moves and thus so do I. The sun is only centered below the far end of the pier for a short while, perhaps 30 seconds or less, and getting the camera reasonably high up off the water while positioning the pilings where I wanted them and keeping them vertical was tougher than I thought I would be. The nice part was that even though the solar alignment that makes these sunsets special only really occurred one of the three evenings (and was probably not properly aligned had I been shooting from the shore), it was still great to get wet and enjoy the surf and I landed some new views of the pier I have known since 1981 (ok, including the older pier and this new one). This photograph was the image from that effort with which I am happiest; it seems to capture dark shadows that settle under the pier rapidly as the sun disappears, the thin pastel colors in the clouds, and rapidly moving wavelets of water reverberating through the pilings. Cheers, and thanks for looking!