Photos of the Racetrack in Death Valley National Park, and the Racetrack’s sliding rocks (or sailing stones).

The Racetrack is an ancient dry lake bed in Death Valley, famous for its sailing stones. Located between the Last Chance Mountains and the Cottonwood Mountains, the Racetrack Playa lies at 3600′ above sea level, is about 3 miles long by 1 mile wide in size, and appears almost perfectly flat. Much of the year the Racetrack lakebed is totally dessicated and covered with small hexagonal mud patterns, although during the two rainy seasons that Death Valley experiences the playa becomes muddy and is sometimes “underwater”. At the south end of the Racetrack Playa are found the Racetrack’s famous “sailing stones”. Typically about the size of a shoe box or larger, the stones mysteriously move about the playa leaving trails behind them. Noone has actually observed any of the stones moving. One theory about their locomotion suggests that a combination of wet mud (during the winter rainy season) and high winds, perhaps combined with a thin layer of ice atop the mud, allows the stones to slide. Evidence indicates that the rocks move once every few years, and that tracks last only 4-5 years. My hunch is the occasions of the stones’ movement is a function of seasonal weather patterns and the presence or absence of sufficient water, wind and ice to trigger the sailing phenomenon. The sailing stones originate on the slope of a hill that rises above the south end of the playa. Many of the stones have moved hundreds of yards from their source, out toward the center of the lake bed, each leaving a striated channel behind it in the mud, like the wake of a boat. 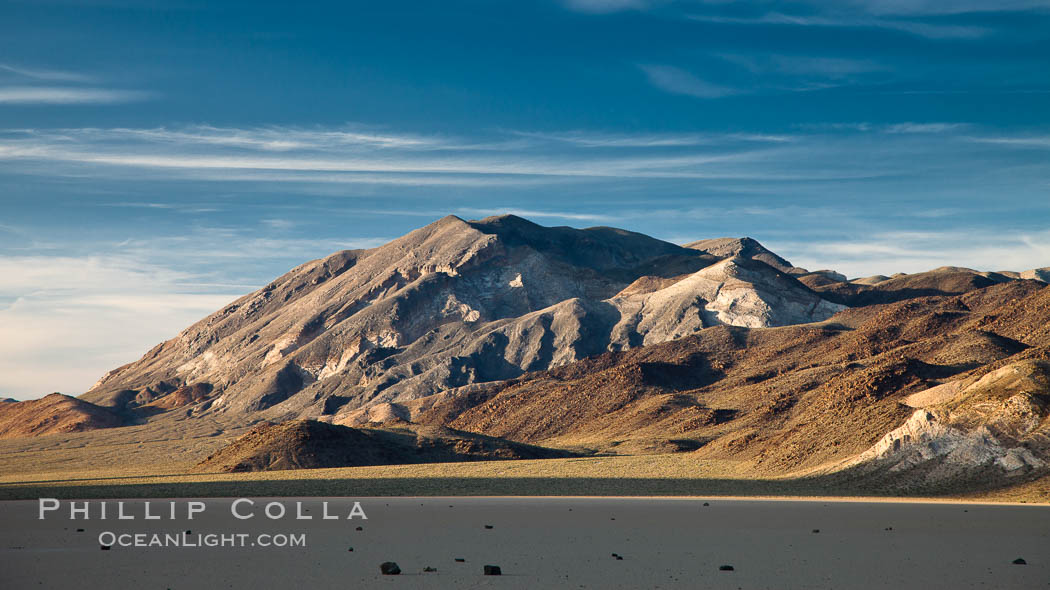 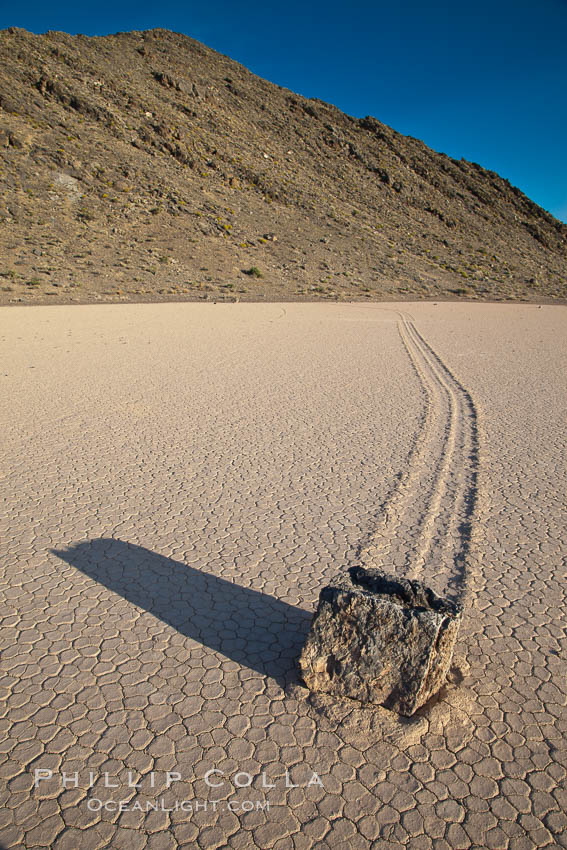 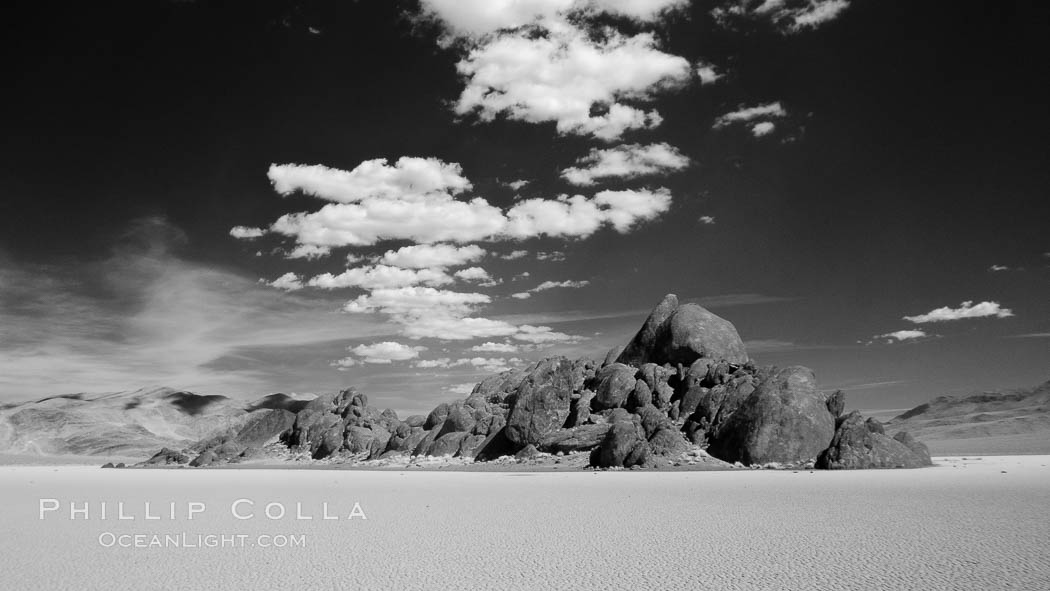 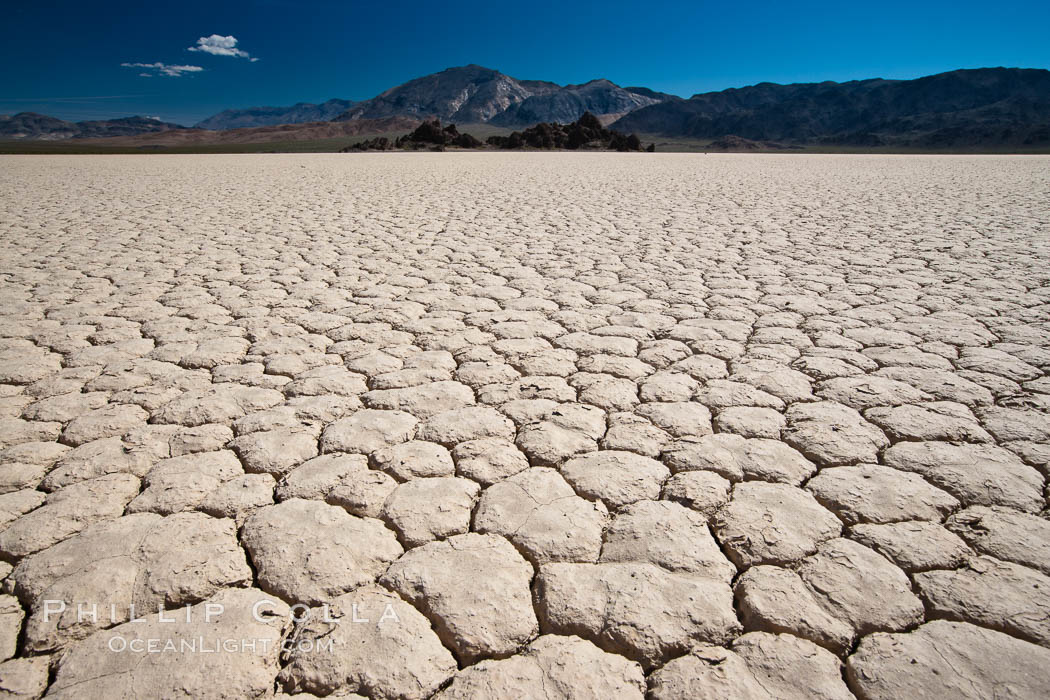 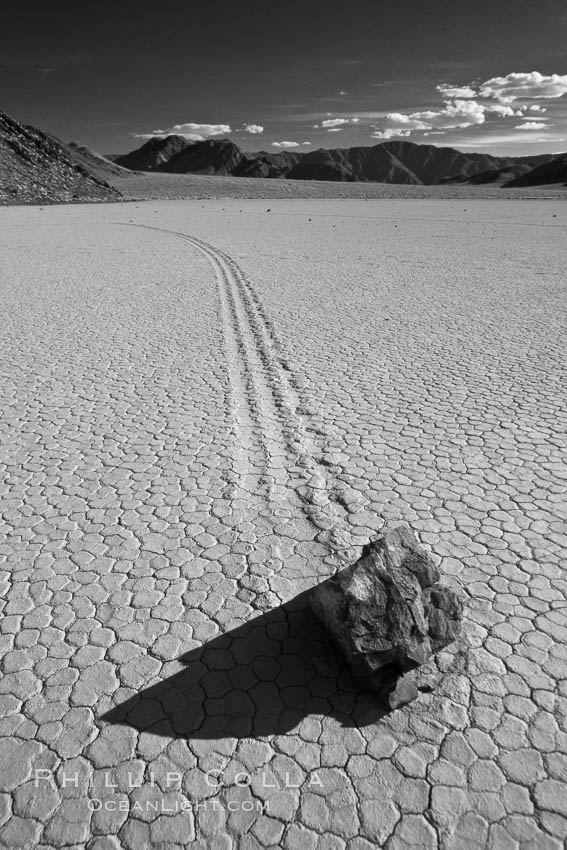 Sailing stone on the Death Valley Racetrack playa. The sliding rocks, or sailing stones, move across the mud flats of the Racetrack Playa, leaving trails behind in the mud. The explanation for their movement is not known with certainty, but many believe wind pushes the rocks over wet and perhaps icy mud in winter.
Image ID: 25333
Location: Racetrack Playa, Death Valley National Park, California, USA

At the north end of the Racetrack is found the “Grandstand”, an assemblage of giant round boulders stacked in the middle of the playa. In the olden days**, miners would gather on the Grandstand to stage and watch horse races on the playa.

Our visit: After we left the Eureka Valley Sand Dunes, we drove on some long but easy dirt roads to Scotty’s Castle where we stopped for lunch and to stretch our legs. We saw some great expanses of flowers along the way, evidence that the wildflower bloom comes later to the higher-altitude reaches of Death Valley. After Scotty’s Castle, we drove to the Racetrack via the notorious Uhebehebe-Crater-to-Racetrack-Road, a 27-mile-long dirt road that is famous for its tire-piercing ability and funky Teakettle Junction at which a photo must be taken. (Yes, those are actual teakettles hanging from the Teakettle Junction sign.) 4WD is not required for this drive but the suspensions that 4WD vehicles typically have are helpful for the washboard track. Sturdy tires with sidewall puncture resistant are also helpful. I have experienced a flat tire on this road in the past and it was a bummer, but on this visit we were in a well-equipped off-road vehicle and the road was in super shape so we made it to the Racetrack in about 45 minutes with no drama. We spent one sunset admiring the sailing stones, then shot some night sky photos and milky way timelapse video while camping at the primitive campground beyond the Racetrack. We returned to look at the rocks again at sunrise the next morning, then climbed to the top of the Grandstand on our way back out to Uhebehebe Crater. We saw one car in the distance while we were at the playa, but never actually enountered another person the entire time we were there. It was great.

I wish Leonard Nimoy would produce an episode of “In Search Of” about these uber-curious stones since it is my theory that, while they are interesting to landscape photographers, the mud tracks are actually landing strips left behind by tiny alien spacecraft. I discovered another Alien Spaceport in California some years ago. I now believe there is a network of these facilities, with the Racetrack being just one example. I will continue my investigations in this regard.

**Olden days (n): a technical term referring to a vague period in history that occurred sometime before I was alive and about which I know virtually nothing.