Update 12/28/07: Wow! This morning Laurie was pictured and quoted in an Associated Press article about the trend of people moving to western states such as Montana and Wyoming, appearing in newspapers throughout the United States. [AP Photo][AP article]

Our main motivation for visiting Yellowstone National Park this past October was to find an opportunity for my daughter to see wolves, in the wild, with our friend Laurie Lyman. Laurie taught at the Rhoades School for many years. Our daughter was part of her swan song class, the 3rd graders of ’04-’05. Following each vacation, which Laurie would spend in Yellowstone, she would entertain her class with stories of the Druids and Sloughs, of the alpha and beta wolves in each pack, which packs were faring well and not-so-well, and of the pups that would appear in spring. She was so loved that her class donated a radio collar, in her name, to be placed on one of the Yellowstone wolves so that it could be tracked using radio telemetry. I believe the collar is still transmitting. Immediately after retiring from teaching, Laurie moved to Cooke City, Montana to study wolves in the northern part of Yellowstone National Park, including the Slough Creek pack (which she has known since its inception in 2002) as well as the Druid Peak, Agate, Hayden and Molly packs. Her husband Dan splits time between Montana and California but is often with her in the field when he is in Montana. During the past few years, having rarely missed a day in the field, Laurie has gathered volumes of detailed field notes and considerable understanding of the complex social dynamics within and between various wolf packs in the Yellowstone area, including the roles played by key individual wolves and movements of individuals between packs. She can often be found in the field with noted wolf researcher Rick McIntyre.

On my several visits to Yellowstone, when I decide I want to see a wolf, I start by finding Laurie. Each time I have met with her, she has shown me wolves, so I have a perfect record so far! (I have seen a few wolves without her help, but honestly I am much better at spotting whales than wolves. I am well out of my element in Wyoming and need all the help I can get.) This year we spent two mornings with Laurie in the Lamar Valley and were treated to some fantastic wolf action. On our final day there we saw the Druid Pack cross a broad snow-covered field to pursue a bull (male) elk, a big fellow with an intimidating rack of antlers. This was the real thing, Wild Kingdom-esque, right there in front of us. Laurie made it clear that we should pay close attention and appreciate this special sight, so we did. Both elk and wolves were running at full speed through snow, across a river bed and over a number of small hills. For a while it appeared the wolves would catch the elk and make a kill, but eventually it seemed either the wolves grew tired, lost interest or perhaps concluded that they were not ready to tackle such a formidable adversary; the elk got away. What was particularly intriguing was that the chase was also watched by a grizzly who was positioned on the far side of the wolves. The bear seemed put off by the commotion and moved away into the trees, but stopped several times to watch the action. Much of the time we were with them, Laurie and Rick were in frequent radio communication with others elsewhere in the Lamar who were watching the same wolves from different vantage points or other wolf packs in the area. Rick kindly offered his scope to a few people who just happened by so they could get a glimpse, and patiently answered all of our questions.

Most wolf observation is done through high powered field scopes, Swarovskis and the like. Only once have I had a good look at a wild wolf without a scope. I have no real interest in trying to photograph wolves, at least not in any serious way with high end photo equipment, preferring to leave them to their business. Checking on them from afar through a scope is satisfying enough for me. Wolves receive enough attention already, from wolf lovers who just want to watch them to ranchers who believe that the only good wolf is a dead wolf, that they do not need to be further pursued by yet another photographer looking to shoot yet another wolf photo. We stayed high up on a hill with a great view of the entire Lamar Valley, listening to the howling of the wolves and watching them do their thing. Laurie’s friend Pauline, an accomplished digiscoper (what’s that you say?), allowed me to take a few photos by pressing my super-duper-ultra-mini-pocket digicam to the tiny viewfinder on her field scope. I even managed to get a shot of 10 Druid Peak wolves in one frame. It turns out that the simple act of aiming a point-and-shoot camera through a field scope and pressing the trigger, which even a simpleton like myself can do, is considered a “technique” and has a name: digiscoping. So there you have it, we were digiscoping the wolves. Photography for the masses: all you need is a scope and a point and shoot camera, and it’s pretty fun to boot. No strenuous hiking around either. I thought our digiscope shot was pretty good for a first wolf photo, and a fine souvenir of our morning watching the wolves with Laurie. 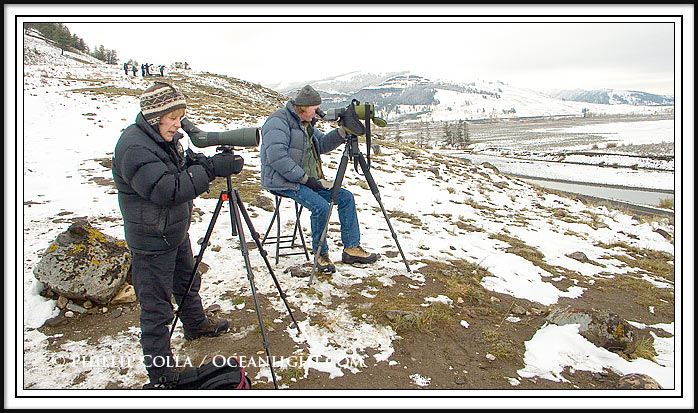