By adminAugust 13, 2013Astrophotography and Night Scapes, Yosemite
No Comments

August 11-12 was near peak viewing for the 2013 Perseid meteor shower, and many people including myself were viewing the show from Yosemite’s Glacier Point all evening long. However, because the moon was nearly new and it was late summer, I knew there was an opportunity to see the faint, remarkable Zodiacal Light the following morning. My plan was to let my cameras run all night capturing Perseid meteors until about 90 minutes before sunrise, when I would reset them to photograph the (hoped for) Zodiacal Light. I managed to get a couple nice images of Zodiacal Light, better than my one previous attempt! 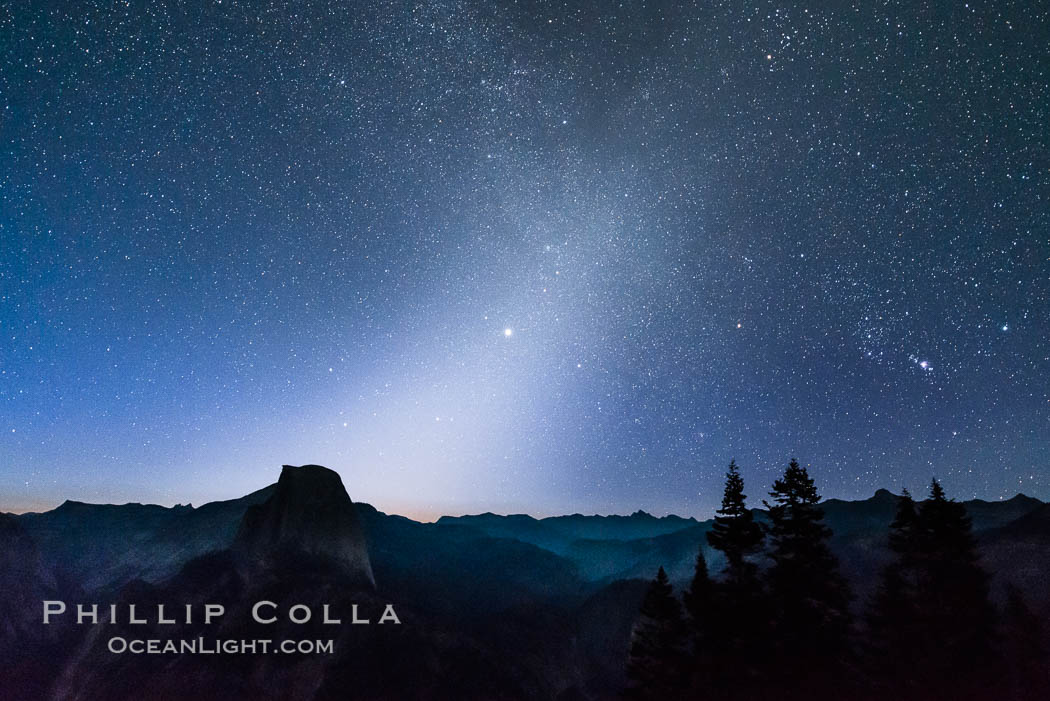 Zodiacal Light arises from sunlight that reflects off a disk of space dust that orbits our inner solar system. Zodiacal Light is purely a solar system phenomenon (relatively local to our planet) and is not associated with stars that are observed alongside (behind) it. The aforementioned “space dust” is thought to arise primarily from asteroid and meteor collisions (Nesvorny and Jenniskens, 2010), and resides on the plane of the ecliptic. (The plane of the ecliptic is the plane in which planets orbit around our Sun.) While aligned with the plane of the ecliptic, this dust cloud is not thin. Because it extends outward from the sun to the vicinity of Jupiter (with its strong gravitational field), the dust cloud is disturbed in such a way to give it a thickness, explaining the width of the Zodiacal Light that we observe. The Poynting-Robertson effect causes this space dust to slowly spiral inward toward the sun (where it is consumed), so a constant supply of new dust from colliding comets and asteroids is required to maintain the dust cloud. Sunlight reflecting off this dust can be seen in our night sky when there is little or no competing moonlight and/or light pollution from nearby cities. Zodiacal Light appears as a faint pyramid or triangle glowing on the horizon, with the apex of the pyramid tilted in line with the path of the Sun and the plane of the ecliptic. In these photos, planet Jupiter (which lies in the same plane of the ecliptic as our Eath and follows the Sun’s path through the sky) is clearly seen as the brightest object within the triangle of Zodiacal Light. This view is roughly northeast, looking past Half Dome from Glacier Point with the Yosemite High Country in the distance and Little Yosemite Valley at bottom middle.

The faint northern arm of the Milky Way is also discerned in these photos, crossing from upper left to lower right.