A Day At The Wave, North Coyote Buttes, Part II

By adminApril 20, 2008March 8th, 2020Arizona, The American Southwest, The Wave
No Comments

The last 20 minutes of my flight to Vegas were crazy, with the plane dipping and bobbing all over the place in the wind. The steward seemed to enjoy it, stating that it was just normal flying conditions for Vegas when summer approaches and the weather warms up, so I figured it was no big deal. However, driving from Las Vegas to northwest Arizona on Tuesday afternoon I was pretty worried. The winds were HOWLIN’ and visibility was down to about 2-3 miles, with occasional near-whiteouts. There was no way any photography could be done in those conditions, and I figured if the winds did not subside significantly by the next day my visit to the Wave would be a big bummer. The big fat gas-guzzling SUV rental I was driving was getting buffeted as I made my way from Hurricane to Page on Highway 89. In fact, I wondered whether it would be a mistake even to simply hike to the Wave (leaving my camera junk behind), given the unrelenting winds and the frequent very strong gusts. I made a stop at the BLM station to get some advice about what to look for on my hike other than the Wave itself, and they sort of laughed at me and wished me good luck dealing with the wind, suggesting it might be a good idea for me to take a parachute (wa-huh?). After a pause, one of the rangers informed me that the entire state of Arizona was awash in a Navaho dust storm, and indeed the sky was quite red. But, he said, a cooler front advancing down from the northwest was due to arrive Tuesday night, and would (hopefully) settle things down a bit. OK, I thought, hope springs eternal.

Wednesday morning in Page dawned much cooler (cold actually) and calmer, with just a twitter of movement on the tips of the tree branches. By 6:30am I was on Highway 89 for the 30 minute drive to House Rock Valley Road, and was at the Wire Pass trailhead by about 7:30am. Not a cloud was in the sky and the air was clear, no longer filled with dust. The sky was deep blue (great for photos) and there was still very little wind. It looked as if cool temperatures (which I prefer when hiking) were to be the order of the day. All looked promising! There were a few other people at the trailhead as well, putting on shoes and adjusting packs and locking their cars. One family had their dog with them; what a great day for a hike with the dog I thought, telling myself that our old dog Bailey (who had passed on a few years ago) should have been here with me too. And so I began my walk to the Wave. 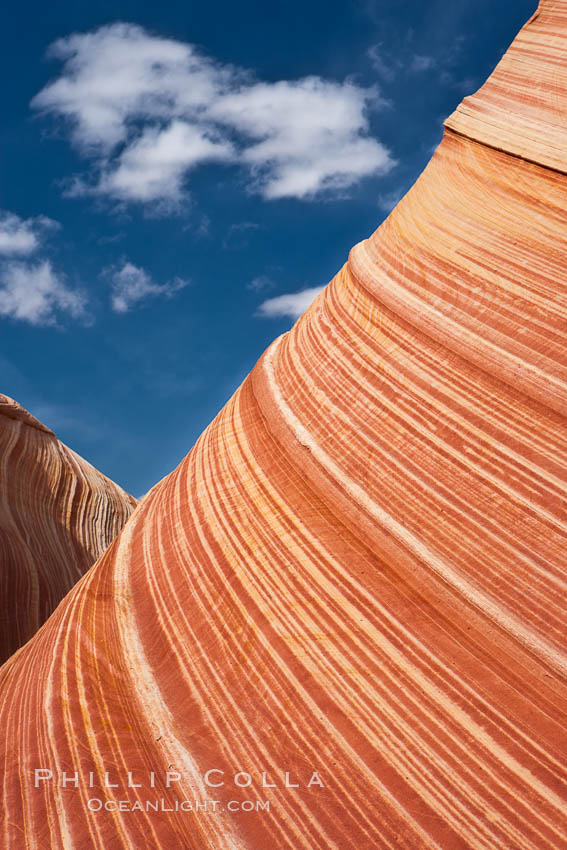 The Wave, an area of fantastic eroded sandstone featuring beautiful swirls, wild colors, countless striations, and bizarre shapes set amidst the dramatic surrounding North Coyote Buttes of Arizona and Utah. The sandstone formations of the North Coyote Buttes, including the Wave, date from the Jurassic period. Managed by the Bureau of Land Management, the Wave is located in the Paria Canyon-Vermilion Cliffs Wilderness and is accessible on foot by permit only.
Image ID: 20623
Location: North Coyote Buttes, Paria Canyon-Vermilion Cliffs Wilderness, Arizona, USA

I should mention that when your permit to visit the Wave arrives in the mail, it is accompanied by a three page set of directions for finding the Wave amongst the rolling sandstone bluffs and sand dunes. Azimuth headings are provided for those using a compass, while latitude/longitude coordinates are given for five waypoints between the trailhead and the Wave for those using GPS. Hmmm, this looked serious. Rangers and other authorities are always telling us to take the outdoors seriously, don’t underestimate the risks involved in hiking in the wilderness, and other stuff like that — and usually I sort of note it and file it away, recalling it after I’ve gotten myself in trouble. Also, I had read some comments on the internet about how tough the hike to the Wave was (not knowing these were apparently fairly inexperienced or unfit hikers). However, better safe than sorry this time. Not being a desert expert and not knowing what to expect, I brought both my GPS and compass, but really did not need either. The directions, which included some annotated photos identifying major features along the trail, were more than sufficient. The fact that one couple was ahead of me, leaving their footprints where the trail was sandy, also helped a little. At least if they were lost, I was lost with them. I did check my GPS against the waypoints provided in the directions and they matched reasonably well. The conditions were so perfect for walking that it was hard to imagine how I could go wrong. But considering the surroundings, I could see how a hiker could become lost easily in the North Coyote Buttes area if the weather turned bad, or stayed out past sunset and was unable to find the visual landmarks needed to return to the trailhead at the end of the day.

A Day At The Wave, North Coyote Buttes, Part I