A bald eagle (Haliaeetus leucocephalus) pulls a fish from the water on the fly, leaving a splash in its wake. The fish can be seen in the eagle’s talons. 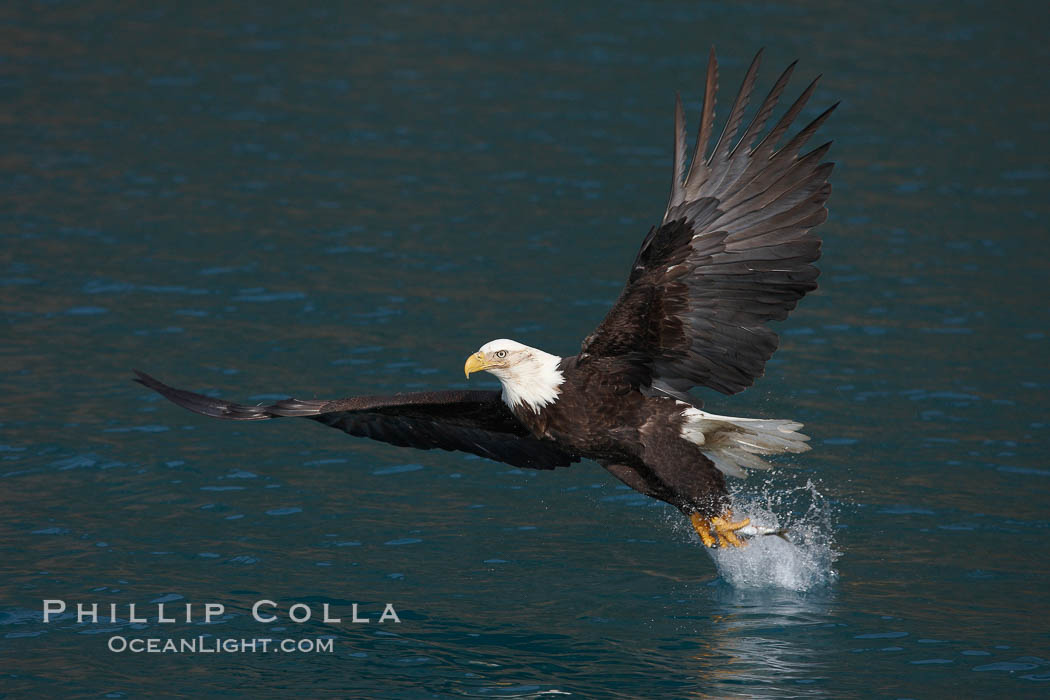 Curious how this photo was made? I used to wonder how photographers captured amazing images of predators taking prey. Naive, I know. As I gained experience and spoke with other photographers I learned that food is the key to photos like these. Naturally, most wildlife behavior involves the subject’s search for or acquisition of food. What viewers often don’t realize is that surprisingly many wildlife images are made when people provide food, or some suggestion of food, in order to attract the subject near enough for a photograph or to entice the animal to carry out some behavior. Some photographers and filmmakers have made their careers this way. In the case of bird photography, food is used in a high proportion of images since, in general, birds have no inate interest in being near people. I have heard comments suggesting that 90% of the bald eagle photographs appearing in print in recent years were made in Homer in winter, and after visiting Homer and seeing how photography works there I don’t doubt that statistic. Fundamentally, eagle photography in Homer is based on the fact that food is regularly provided to the birds, attracting them in great numbers and with surprising proximity. From what I understand, recorded bird calls are often used to attract certain bird species that are otherwise difficult to approach, although I have not seen or heard them used as far as I know. Spectacular photos of snowy owls and other raptors taken in snow are often created by photographers who place store-bought mice on the snow and photograph the birds as they swoop to take the mice. Analogous situation exist underwater as well, most notably with shark photography. Typically, sharks want nothing to do with people. However, judicious use of bait makes good shark photography possible. For instance, virtually all photographs of great white sharks involve some use of bait and/or chum, mine included.

Most members of the photography and natural history publishing community are aware of how bait is used in the production of photographs, and there are ethical conversations going on continually in the online photography forums about it. Some photographers are quite open about their use of bait to bring subjects close, sometimes publishing their secrets or teaching others in workshops, while other photographers keep quiet about it either out of embarassment or to maintain a competitive edge. Most pros and stock agencies indicate somewhere in the metadata that accompanies an image whether food was introduced in its making. Photo editors generally know as soon as they view an image whether there was baiting involved, but typically this information is not included with the photo when it appears in print. Some of the top publishers in the natural history world simply rule out from consideration any photos that involve manipulation or captivity of the animals pictured.

In the interest of disclosure, I note that the fish that the above-pictured eagle was pulling from the water was put their by us. We would toss frozen herring from our boat and watch as eagles descended from the trees along the water’s edge to swoop and scoop the fish.

Here is a short list of some other wildlife photography scenarios where the introduction of food is crucial to even having a subject to shoot.

If you liked this image, see more bald eagle photos.

Photo of a Bald Eagle in Flight, Homer, Alaska