I had a chance to go flying with a pilot friend whom I had not seen in a few years, and jumped at the opportunity. Flying in small planes is a lot of fun, and it allows us to see the ocean in ways one cannot from the coast or on a boat. The plan was to fly over the Nine Mile Bank and around the Coronado Islands. We saw hundreds of Risso’s dolphins, and two huge herds of what appeared to be short-beaked common dolphins (it was difficult to be sure from altitude but they were one of the smaller dolphin species). Mola mola (ocean sunfish) were sunning themselves on the surface, we saw about a dozen of them without really even looking very hard. And we found at least four, perhaps five, blue whales above the submarine trench off La Jolla. The only times I have ever truly seen an entire blue whale, clearly and for more than a few moments, is from the air. When observed from a boat, only about 10-20% of a blue whale is visible at a time. When seen underwater, which is quite rare, the entire blue whale may be briefly visible if the water is clear enough but it is nonetheless difficult to truly appreciate the detail and sleek lines that a blue whale has in such a fleeting moment. 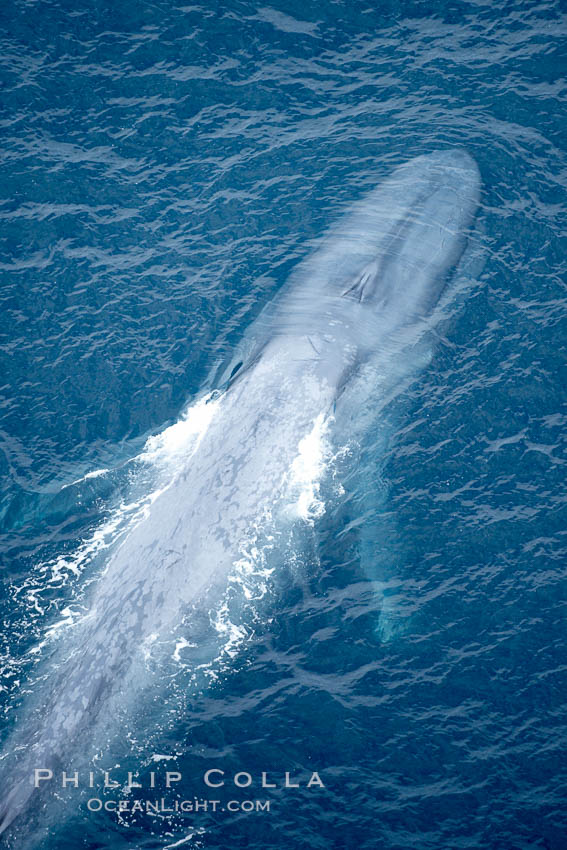 I was glad to have a new Nikon D3 with me since we had less than optimal photography weather and the camera has great performance in low light. The skies were mostly cloudy this day, so the lighting on the whales was flat and without contrast. The low light levels also meant I was fighting for enough shutter speed to freeze the motion of the whales against the shaking of the camera in my hands as I tried to keep it steady shooting out the small plane. I jacked up the ISO to 1600 and even 2000 for some of the shots, and the results were amazing: the color was intact with plenty of detail in the shadow areas and very little noise. I’ve shot film on these animals before in ideal conditions and even then it was difficult to obtain sharp appealing images. Shooting good images with film on this day would have been impossible, and was difficult even with my Canon bodies (1DsII and 5D). But the Nikon D3 recorded so much detail at high ISO that with the usual raw conversion steps (white balance, curves, levels) I was able to glean some real keepers.