This bull elk (Cervus candensis) had a fine harem of females along the Madison River. He was bugling often and loudly, raising his head and lowering his antler rack behind him as he did so. Note how the bull’s upper lip is curled back. This is an example of the flehmen response (from German flehmen, meaning to “curl the upper lip”). The flehmen response is a particular type of curling of the upper lip in ungulates, felids, and many other mammals, which facilitates the transfer of pheromones and other scents into the vomeronasal organ, also called Jacobson’s Organ. In the flehmen response, animals draw back their lips , particularly the upper lip which curls towards the nostrils. The action, which is used when examining scents left by other animals, helps to expose the vomeronasal organ and draws scent molecules back toward it. This behavior allows animals to detect scents, for example from urine, of other members of their species or clues to the presence of prey. The flehmen response also allows the animals to determine, among other things, the presence or absence of estrus, the physiological state of the animal, and how long ago the animal passed by. 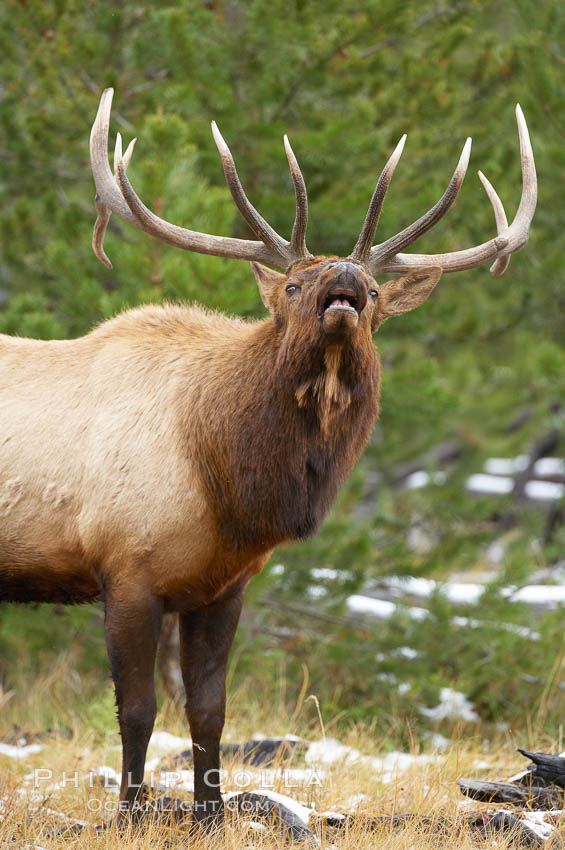 Male elk bugling during the fall rut. Large male elk are known as bulls. Male elk have large antlers which are shed each year. Male elk engage in competitive mating behaviors during the rut, including posturing, antler wrestling and bugling, a loud series of screams which is intended to establish dominance over other males and attract females.
Image ID: 19708
Species: Elk, Cervus canadensis
Location: Yellowstone National Park, Wyoming, USA