By adminAugust 14, 2011Humpback Whale
No Comments

It has been 10+ years since I last worked at making fluke ID photos, but it’s just like riding a bike and one never forgets and I had some success at it yesterday. What is a “fluke ID photo” you ask? The underside (ventral surface) of the fluke (tail) of some species of whales — including most notably humpback whales — typically has permanent visible characteristics, such as light or dark patches, scratches, dots, scars, etc. that allow an individual whale to be identified. Whale researchers, including Dan Salden of Hawaii Whale Research Foundation with whom I worked from some years, maintain growing catalogs of humpback whale fluke ID photographs, allowing them to gain an understanding of where individual whales have been over time and, by extension, develop insight into the population as a whole.

Yesterday I went on a whale watching trip in the Santa Barbara Channel. This is a good time of year to see whales along California as they are moving generally northward along the coast and foraging for krill and schools of small fish. The trip was organized by the Los Angeles chapter of the American Cetacean Society using the boat “Condor Express”. We saw a few dozen humpback whales and a half dozen blue whales, and the seas were nice and flat. The weather was heavily overcast which is terrible for photography, so I resigned myself to use the longest lens I had and focus on practicing making fluke ID photos. I made clean fluke ID photos of 16 different humpback whales, so all I can say for certain is that there were at least 16 humpbacks that we saw. Some on the boat commented that we saw many more humpbacks than that, but looking closely at the fluke ID photos (as well as dorsal fins, which are good secondary ID devices) along with the corresponding times at which they were taken I figure that I personally saw about 18-22 humpbacks. It’s tough to know for sure when 80% or more of the animal is underwater 90% of the time. I totally made up those percentages by the way.

Here are the 16 humpback whales that gave it up for me on this trip: http://www.oceanlight.com/log/img/humpback-whale-fluke-id-identification-photos/ along with a few select ones below. 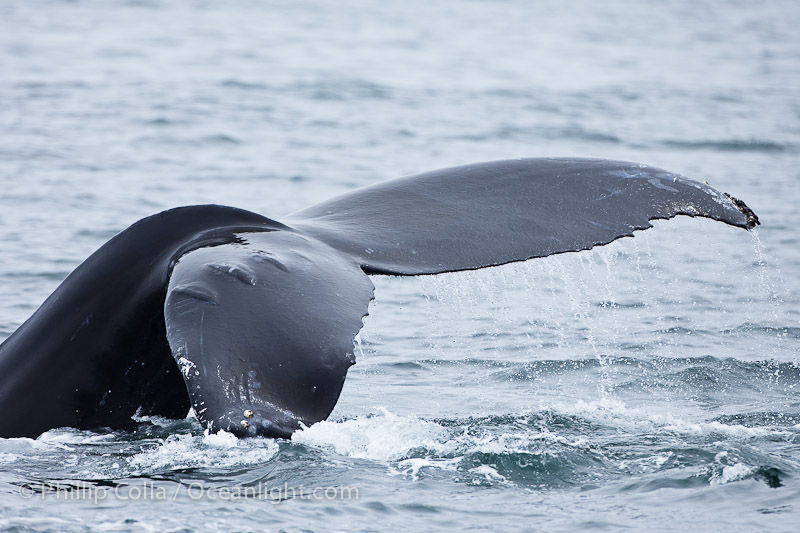