Steeple Jason, one of the Jason group of islands, is to be our only landing today. There has been quite a bit of anticipation for this visit. It is considered one of the major landings of the trip, the location of one of the world’s finest natural spectacles. Lots of mention has been made already of how superlative this place is. A couple people who have been here before suggest that it is one of the world’s “top 10” wildlife scenes. Morning dawns for us on the southwest side of the island, with myriad birds flying about and cacophonous sounds — an enormous bird rookery — coming from the island about half mile away. The breeze brings with it the scent of the colony. I love that scent! To my dying day, the distinctive briny odor of a shore covered in centuries of guano, borne on a fresh ocean breeze, is something I will always associate with remoteness, wildness and the sea. It is the smell of a vast number of seabirds. I have smelled it in the Galapagos Islands, at tiny Rose Atoll, at Cocos Island, in the Sea of Cortez and now in the West Falklands. It is the smell of life, huge amounts of life, life that is intrinsically bound to sea and air. 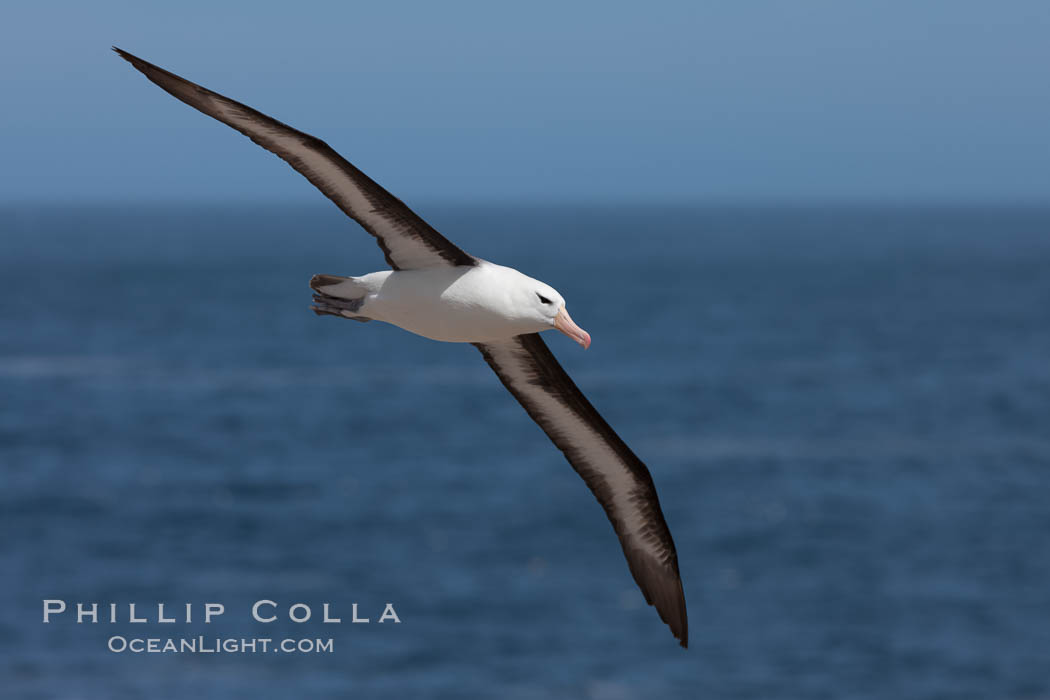 Steeple Jason is steep and rugged, with jutting serrated seacliffs that raise the ramparts of the island high above the ocean. Sections of lush green tussock grass are mixed with broad areas of reddish brown, shorter vegetation. Around much of the island’s western perimeter a white collar marks the seabird colony that lines the coast. Surf pounds the edge of the island, tossing spray high in the air. With a little tectonic nudge, Steeple Jason could easily be two islands. As it is today, the north and south portions are linked by a thin, lowlying isthmus that offers two landing sites, one on each side. 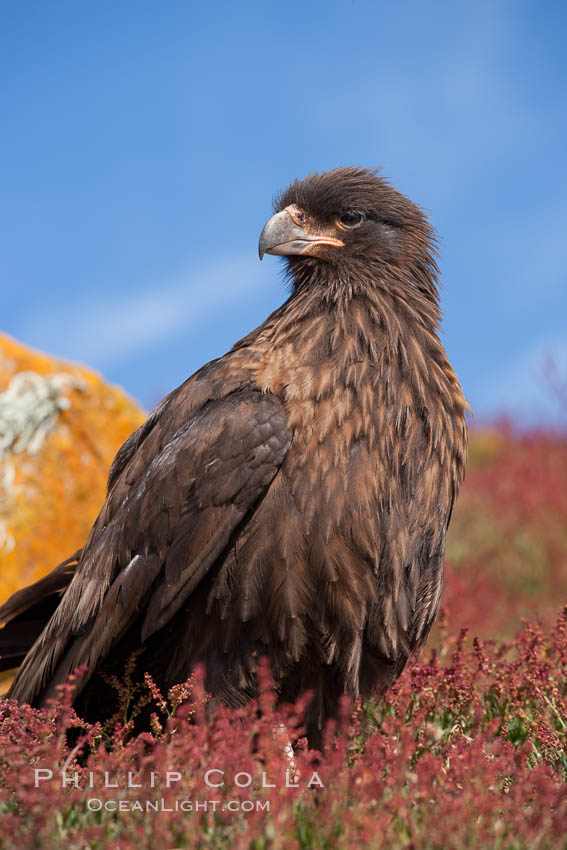 Soon after dawn the freshening wind and swells cause us to move to the other side of the island where we will land at the more sheltered of the two locations, one with thick stands of bull kelp and macrocystis kelp. I admire the lush kelp forest lining the shore and wish I could dive here. In spite of some trepidation on the part of the staff responsible for getting us safely onto the slippery rocks, the landing is not a problem. Within minutes after starting to hike around the north half of the island I see a caracara take a penguin chick. I feel like Marlin Perkins. 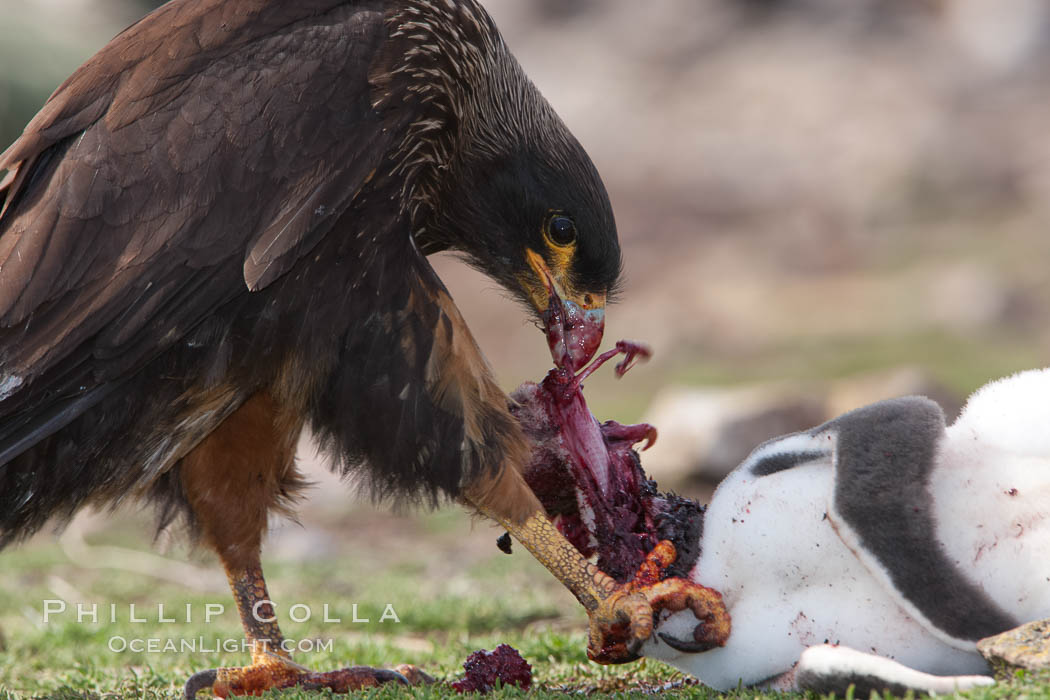 I have switched from my waterproof muck boots to my hiking shoes for the easy one-mile walk to the colony of black-browed albatross (Thalassarche melanophrys). It is warm and sunny, with a few clouds – a great morning for a walk. The trail is several hundred feet above the ocean, which boils down below along the rocky coast. I pass a pair of striated caracaras on some rocks. They are comfortable with my presence so I sit and watch them closely. This seems unusual for raptors. 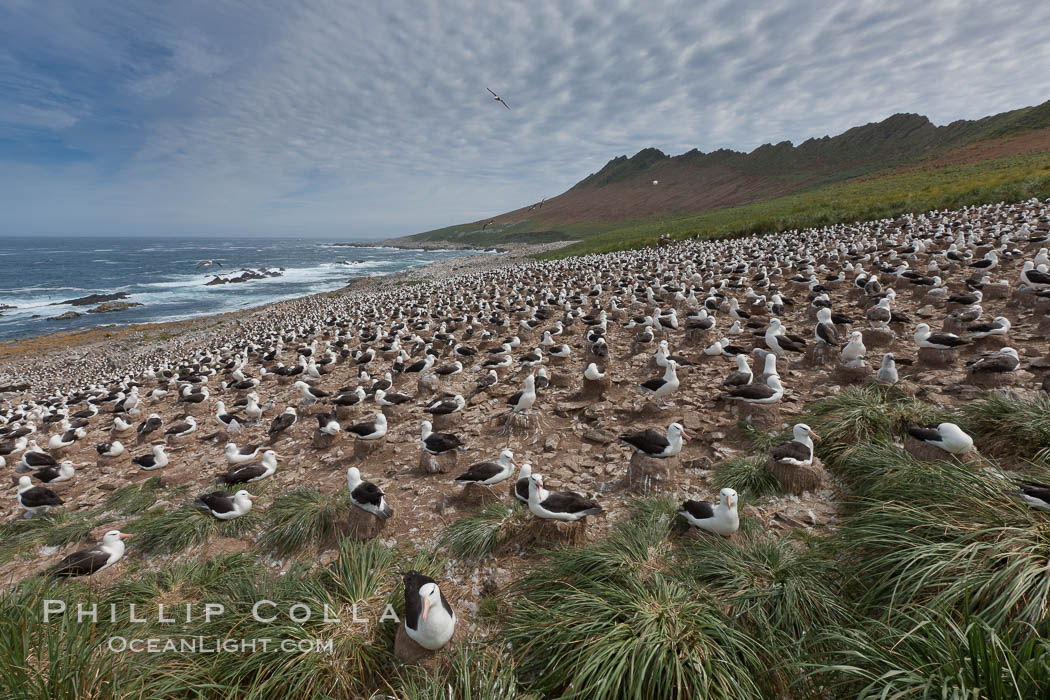 After a short while I reach my first view of the colony. It is a fantastic assemblage of black-browed albatross extending along several miles of coast, ringed by tussock grass and shadowed by a lush green ridge above. It is the principle black-browed albatross colony in all the world. Light winds are fostering much flight activity this morning as parents leave or return to the nest, taking turns caring for their chick and foraging at sea. Constant and loud — but not unpleasant — albatross vocalizations are heard, a mix of croaking, high-pitched screeching and subtle clucking. Some of the larger chicks are left alone. Striated caracaras are constantly on the prowl for such easy prey and over the course of a few hours relaxing at the colony’s edge I see a couple of caracaras carrying away a meal. Eventually, most of our group makes the hike and arrives along the edge of the colony. We all stand in the waist high tussock, enjoying the incredible array of life spread out before us. Eventually I have had enough sun and feel it is time to hike back around towards the island’s isthmus where we landed, to see what else there is to find. In a cove there is a constant stream of gentoos returning from the sea (and some departing), leaping out of the water onto rocks. Back at the gentoo colony that I saw first this morning, the parent of the same dead chick still guards her offspring, keening occasionally and charging the caracara that continues to try to pick off a piece of the chick’s carcass. It is a sad scene. The fortitude of the gentoo in the face of such inevitable and foregone tragedy is astonishing.

After some hours ashore I am now pretty hungry, and eat three sandwiches that the crew has brought ashore to the landing as I sit beside the ocean and realize how fortunate I am to be on this spectacular island. I shoot some videos of the rocky coastline before returning to the boat. I realize that, photographically, Steeple Jason is one of the richest settings I have ever seen. I could easily have used every lens I own, from 15mm fisheye to my longest telephoto. As the M/V Polar Star motors away from the island, black-browed albatrosses and giant petrels fly alongside. After sunset I stand on the deck and photograph them with a flash, making some interesting images. We are now on our way to South Georgia Island, a three day sail.

All of my photography from the trip is linked to the location where the images were taken. If you have Google Earth, you can see all of my photos from Steeple Jason overlaid at the exact location they were taken.