Our approach to Brown Bluff took us across a broad sound complete with blue sky and many scenic bergs, then into a thick fog bank as we left the sound and entered a narrower passage with clouds and cold air pouring down to the water from the glaciers on each side (glaciers make their own weather). 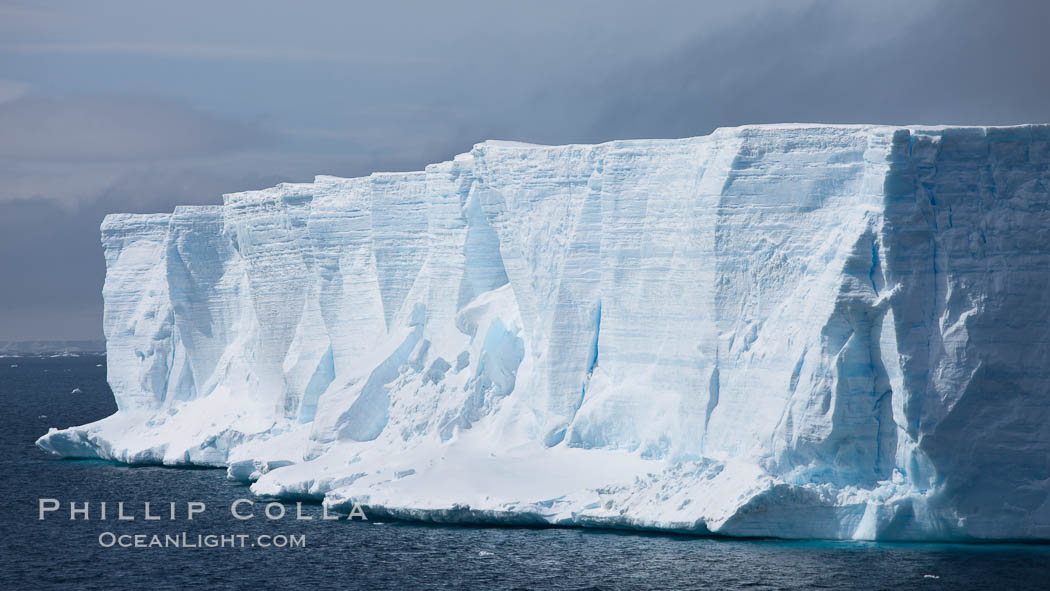 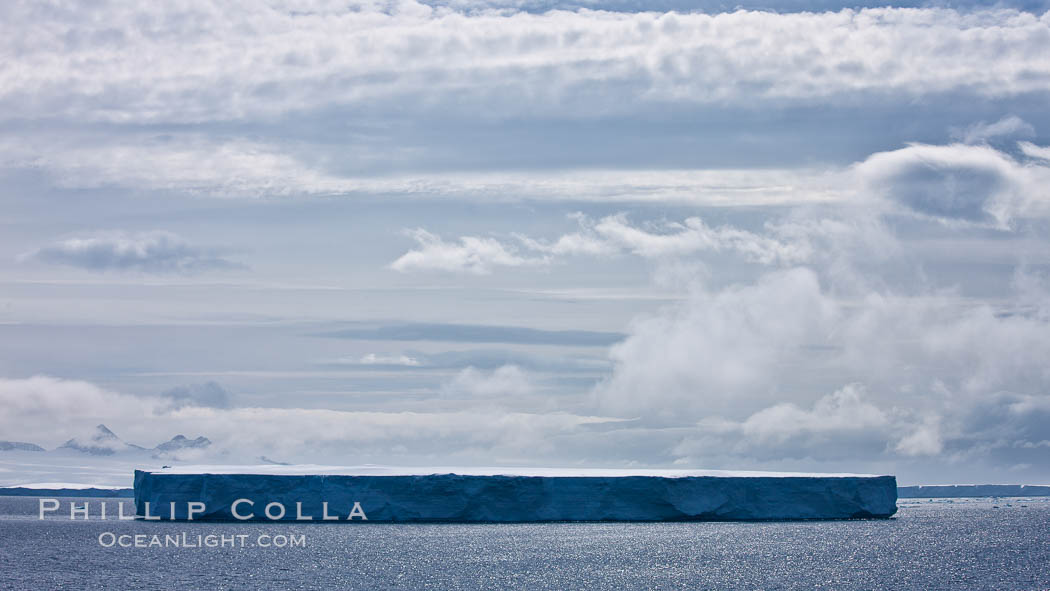 Brown Bluff, an aptly named large rock promontory situated between two glaciers, appeared before us as we approached through a clearing in the fog. Many small bergs were floating just offshore of the bluff, so the big boat was anchored a ways off and we accessed the bluff and its cobblestone beaches with a half mile zodiac run. Several types of penguins nest below the bluff, and are constantly leaving and arriving via the beach. I headed away from the penguins and people to a swath of beach that fronted a long, rolling edge of an ice field. 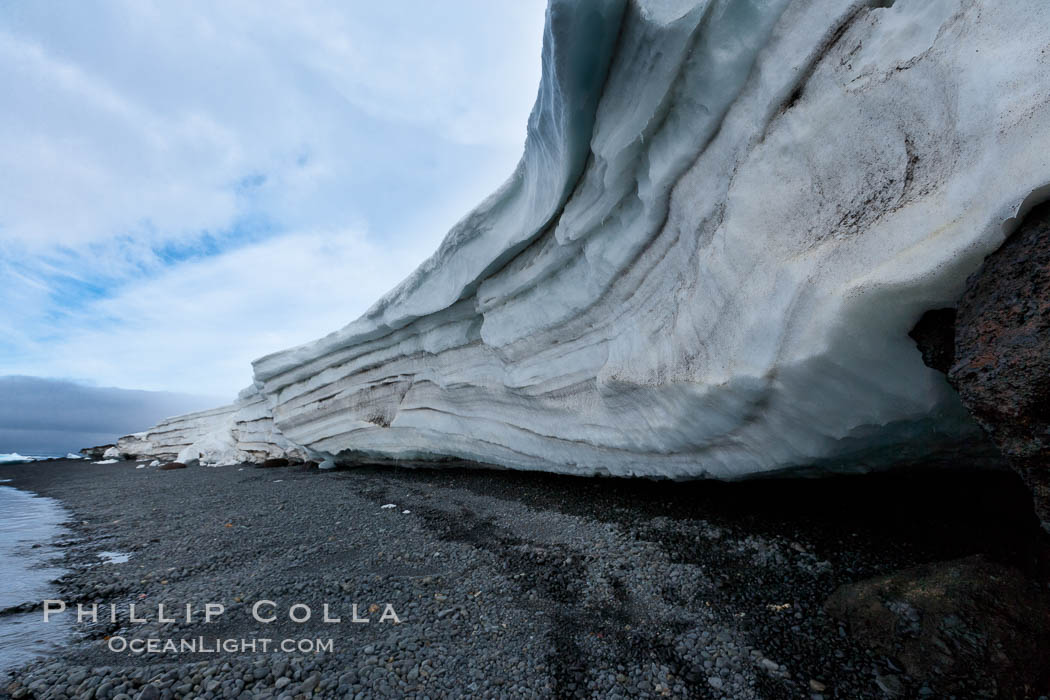 Horizontal striations and layers in packed snow, melting and overhanging, seen from the edge of the snowpack, along a rocky beach.
Image ID: 24782
Location: Brown Bluff, Antarctic Peninsula, Antarctica 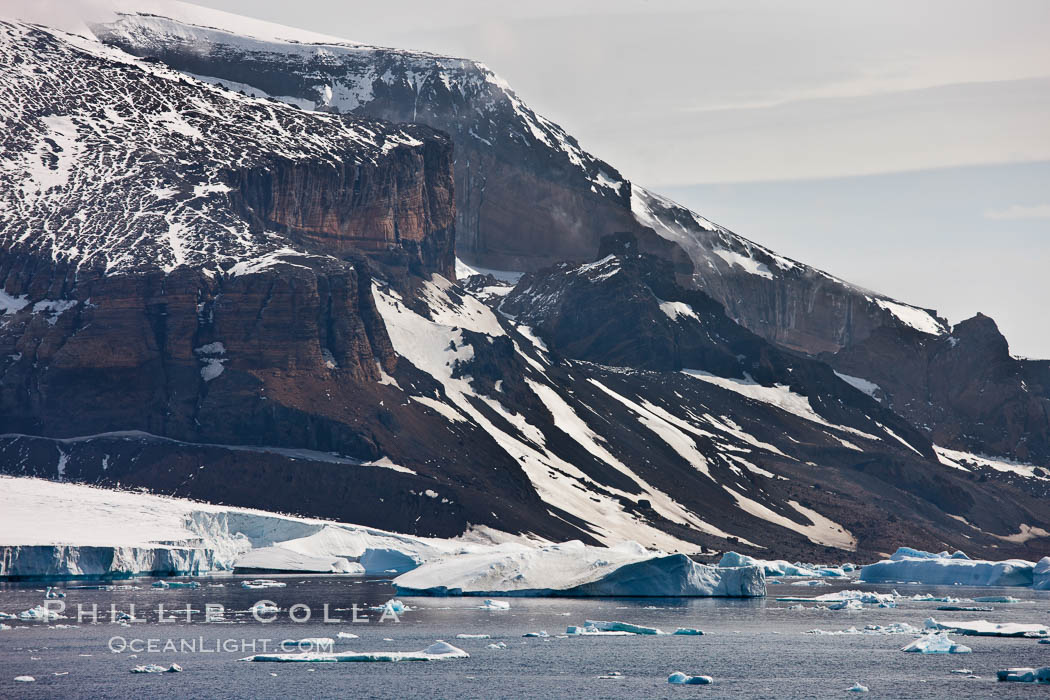 The 30’ ice field ended abruptly almost at the water, leaving a strip of about 50’ of cobblestone beach upon which to walk. The edge of the ice revealed horizontal striations about a foot apart. Were they created by seasonal accumulations of dark dirt blown on top of white snow, or where they perhaps picked from the soil below? I think this interesting “wave” of ice overhanging the beach was the edge of an icefield, rather than a glacier proper, but am not sure. I set about trying to photograph it with my widest lens, contrasting the undulating striations in the wall of ice against the more uniform dark of the beach and the water. It grew cloudy. Water dripped off the ice, wetting the cobbles that would otherwise be dry. I waded out into the water to inspect a few small bergs that had grounded on the shore. Penguins would occasionally swim by me, nearly bumping my legs as they zoomed through the shallows to exit the water onto the beach. Sometimes one would notice me and stop, sticking its head above water and giving me a look-over, swimming about my legs once before moving on its way. Curious little guys. 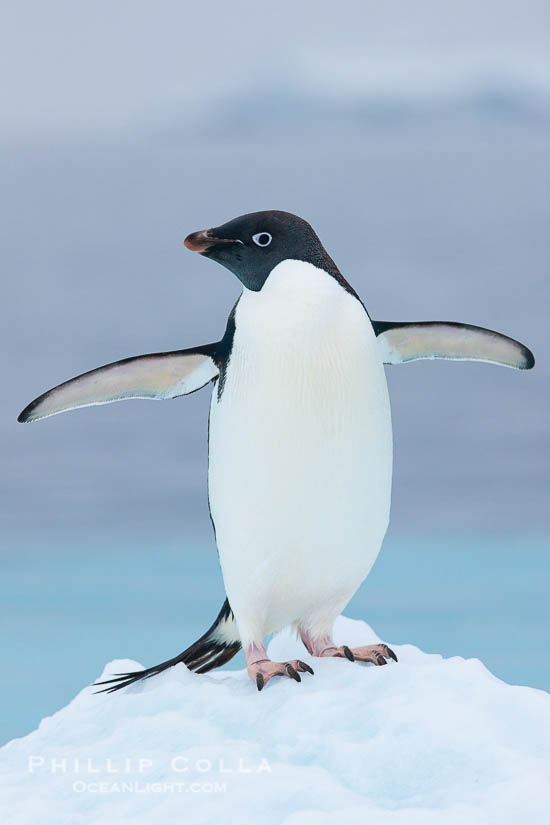 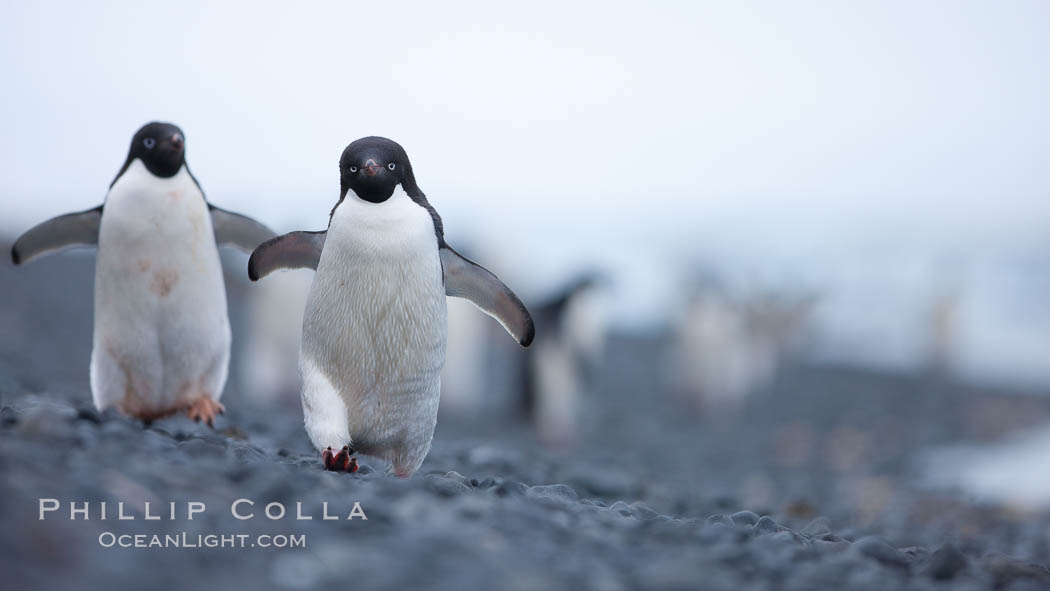 After scrambling over the rocks to get back to the landing site, I rejoined some others and looked about the bluff area to get a sense of all the different bird activity that was happening. Vic was lying down on the cobbles, allowing groups of penguins to pass him by as they walked along the beach. I joined him and soon had a group of 20 or so birds approach far too close for me to take any pictures. They chose a spot 3’ in front of me to make their mad dash into the water. I did not see any leopard seals so I think their concern – and their panicky group entrance into the ocean – was unwarranted, but they must use that method always out of habit or instinct. 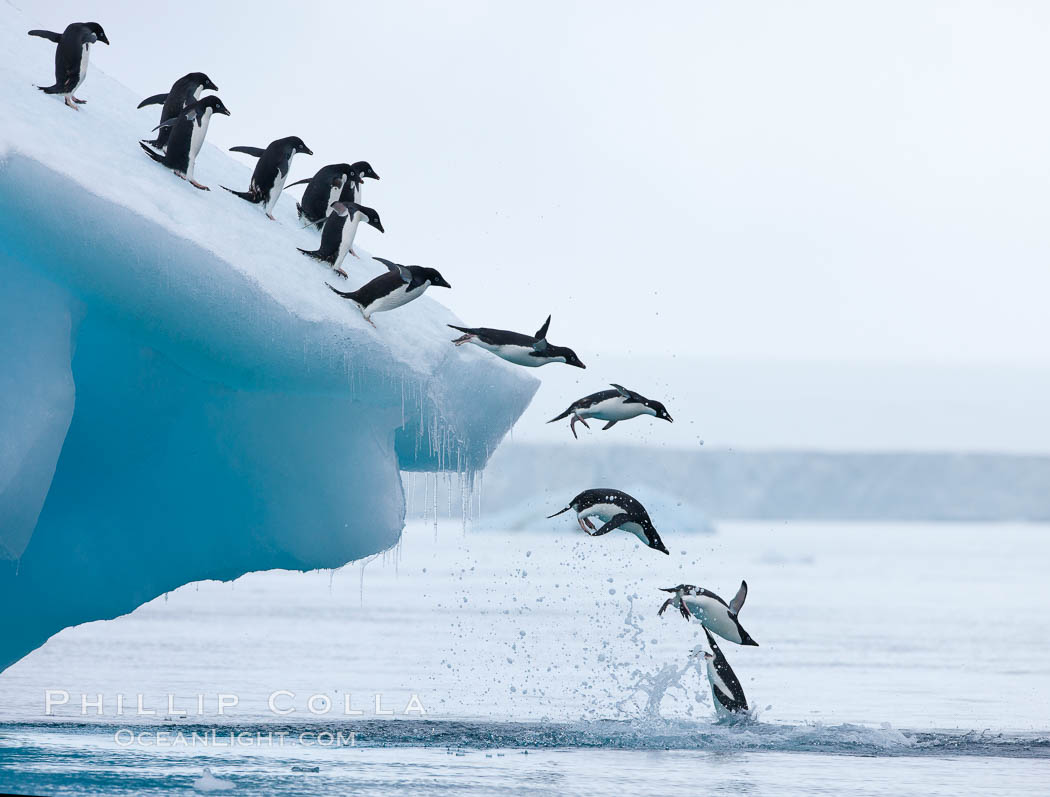 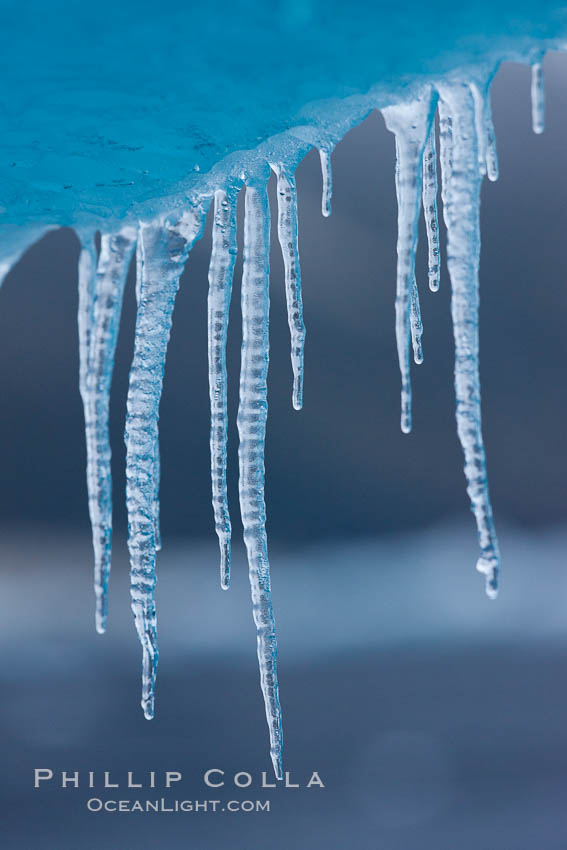 Icicles and melting ice, hanging from the edge of an blue iceberg. Is this the result of climate change and global warming?
Image ID: 24803
Location: Brown Bluff, Antarctic Peninsula, Antarctica

Later we hopped in a zodiac with Hugh and cruised around among the bergs. This was the highlight of the day. Hugh managed to find a group of Adelie penguins (Pygoscelis adeliae) that were diving into the water from a sloping edge of a berg, and we got some nice shots. He then topped that with a group of 14 birds on an even-more-scenic berg, all of whom entered the water from a 5’ ledge. Some of the photos that others (with widers lenses than I) got in that instance were stunning, really suitable for fine art. I got a couple keepers too. Finally he drove our boat into the basin of a hand-shaped berg, with all five fingers protuding 10-20’ out of the water. A 50’ wide basin about 10’ deep was formed between the fingers, large enough for us to take the boat into and slowly maneuver. The whole thing glowed with that cool iceberg blue glow. It sounds simple and unremarkable but the colors were simply out of this world and everyone in our little group was moved by how stunning the color and shape of this berg was. By now the fog had returned and we could see neither beach, nor boat. We were zipping on grey water upon which no horizon could be discerned, between white and blue bergs. Eventually we found the big boat, and the landing, and reclaimed our stuff from the beach before returning to the big boat for dinner. 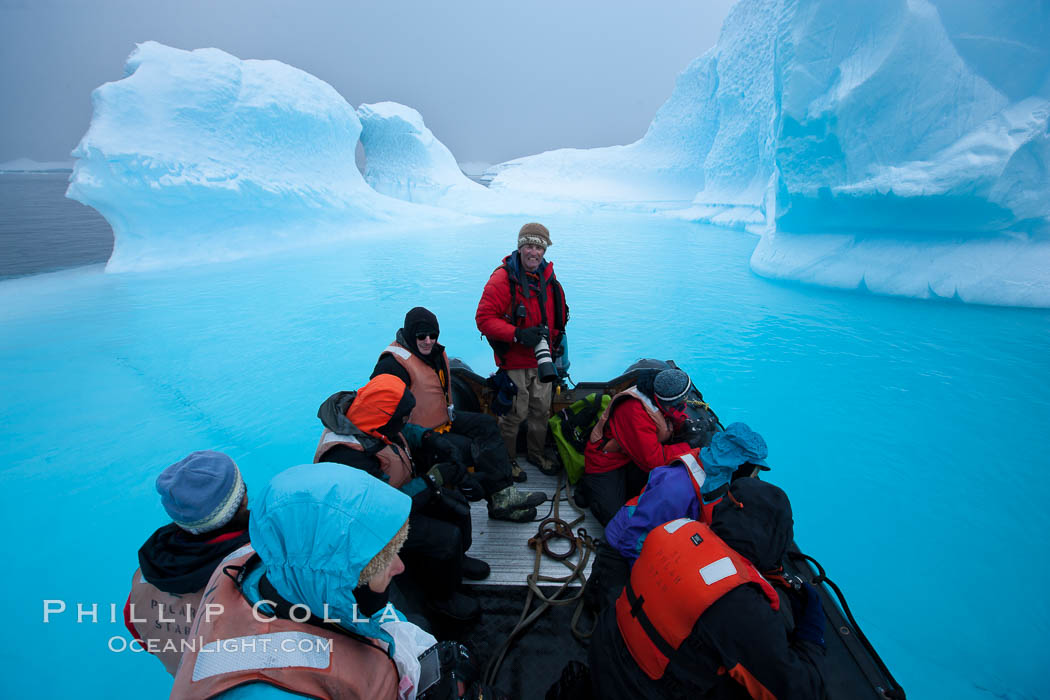