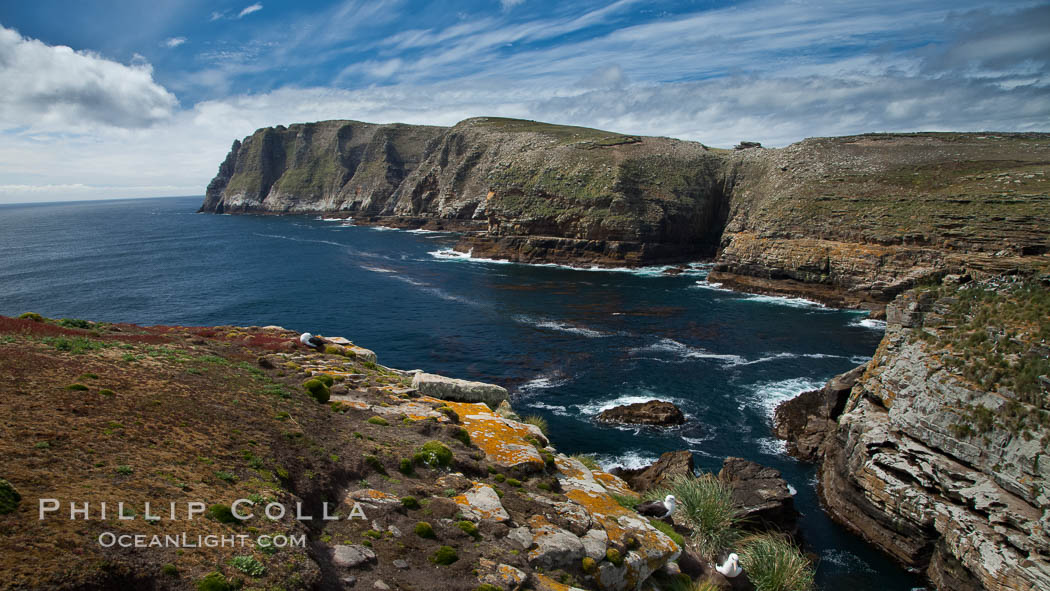 Today is New Years Day, an appropos date on which to land at New Island in the Falklands, our first landing of the trip. Set next to the ocean in a small bight is New Island Settlement, a picturesque set of cottages at the edge of the bay above a sandy beach. We depart from the boat in zodiacs for the shore, leave our dry bags and life preservers in a pile on the beach, and begin an easy walk over wet, grassy hills to a rockhopper rookery. Flightless steamer ducks, kelp geese and upland geese mill about on the sand and through the tall grass. The weather is quite mild so I only need shorts and a light fleece under my foulies. The rockhopper colony is located at the top of seacliffs several hundred feet above the ocean, in a small bowl-shaped depression. Black-browed albatross and imperial shags (cormorants) are mixed in and around the colony as well. To the right of the colony, cut through the cliffs, is a gully that runs steeply down to the water. It is a thoroughfare for rockhoppers, a way for them to pass from the sea to their colony above. Clean penguins coming from the sea pass up the gully to their nests, while muddy penguins descend. I make my way down the gully carefully, eventually reaching the rocky shore. Many rockhoppers are scattered on the rocks, coming and going to sea. A South American sea lion bull patrols the rocks, presumably hoping to catch an unwary penguin. Some of us sit on the rocks and just watch, taking pictures and admiring the rockhoppers. 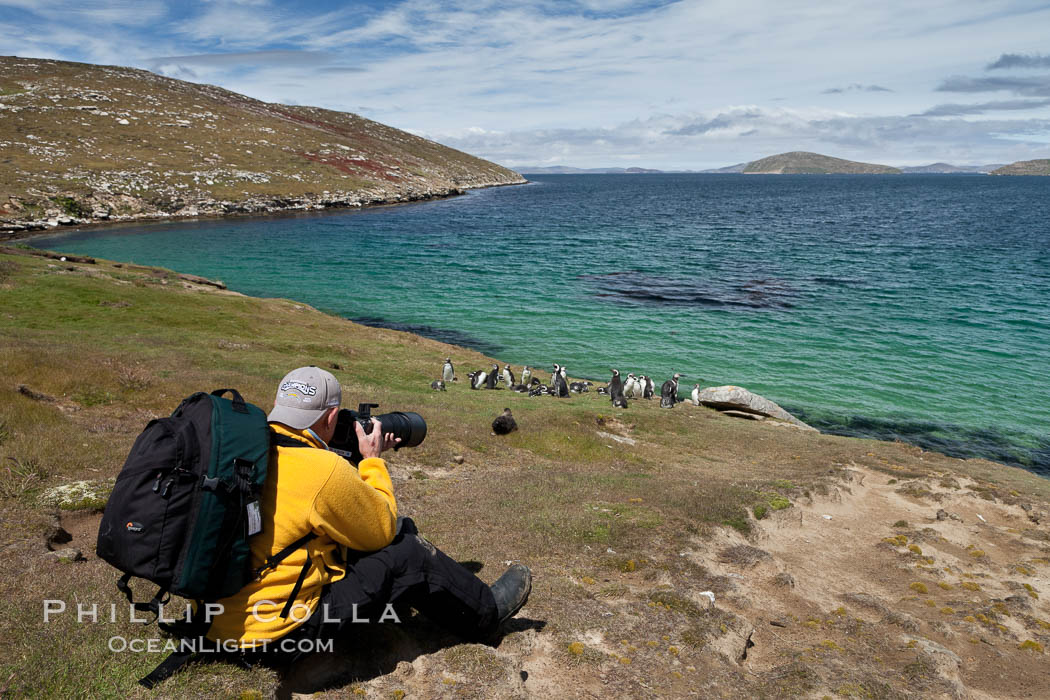 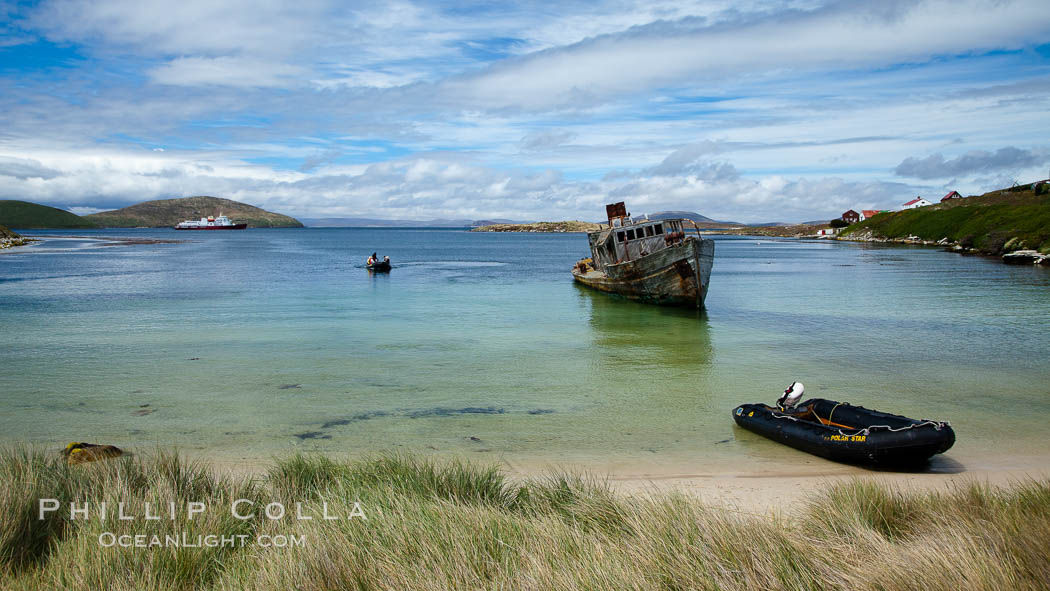 After a few hours, it is time to make our way to the second landing. Rather than return to the big boat, some of us choose to motor straight there by zodiac. Others opt to hike there. We land on another sand beach, with green hills above. The overcast conditions have lifted and we now are favored with blue skies, scattered clouds and some breeze. The objective is to walk to three locations about half mile apart from one another and the beach we are on now: an albatross colony, a gentoo colony and a white sand beach known for surfing penguins. The first thing I encounter on my walk are a series of Magellanic penguins burrowing in the grass. They are cute, standing at the entrances to their small dirt caves. I stick around for 45 minutes checking them out. I don’t see the main group of people so I head off in the direction I think they are, eventually coming to a broad plateau atop the island littered with strange flat, weathered rocks. 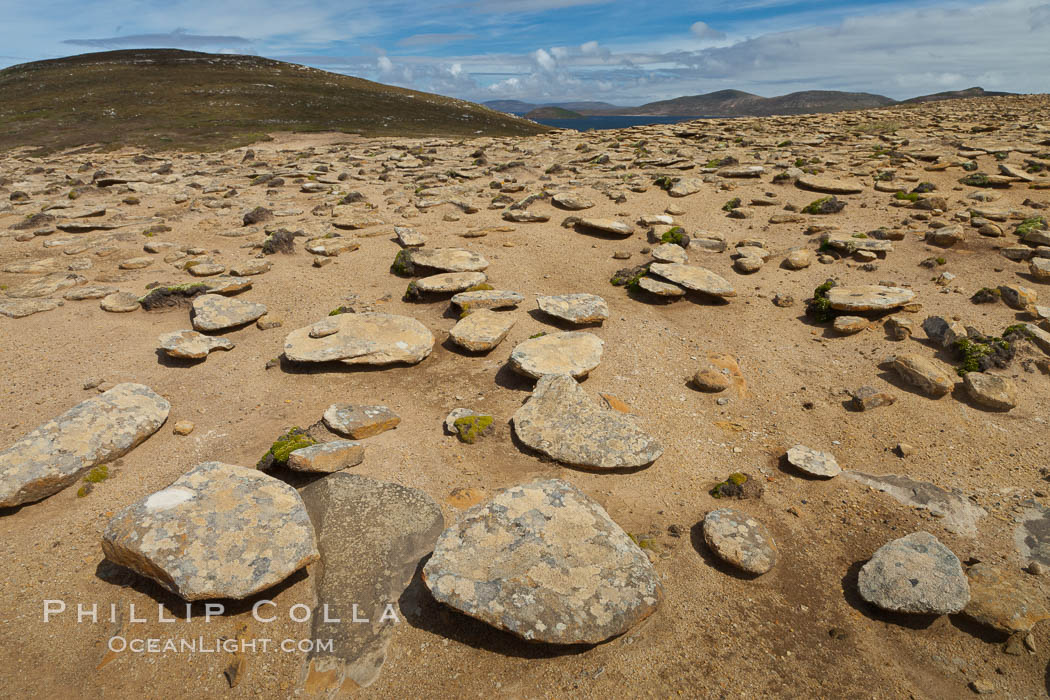 Continuing through the rocks, my walk takes me to a long line of high sea cliffs offering spectacular views, with albatrosses nesting in many places. The wind is blowing but it is quite warm. I sit for a while, take some photos and admire the view. I am quite alone here, not able to see anyone else at the moment. I have this section of cliffs to myself, but for the birds. I make some photos. Eventually I hike over a couple promontories to reach the others at a dense colony of penguins, albatross and shags, also atop sheer seacliffs. There are more animals here but the setting at my previous spot is far more impressive. I take only a few photos, but shoot some videos trying to capture the sounds of the bird life. 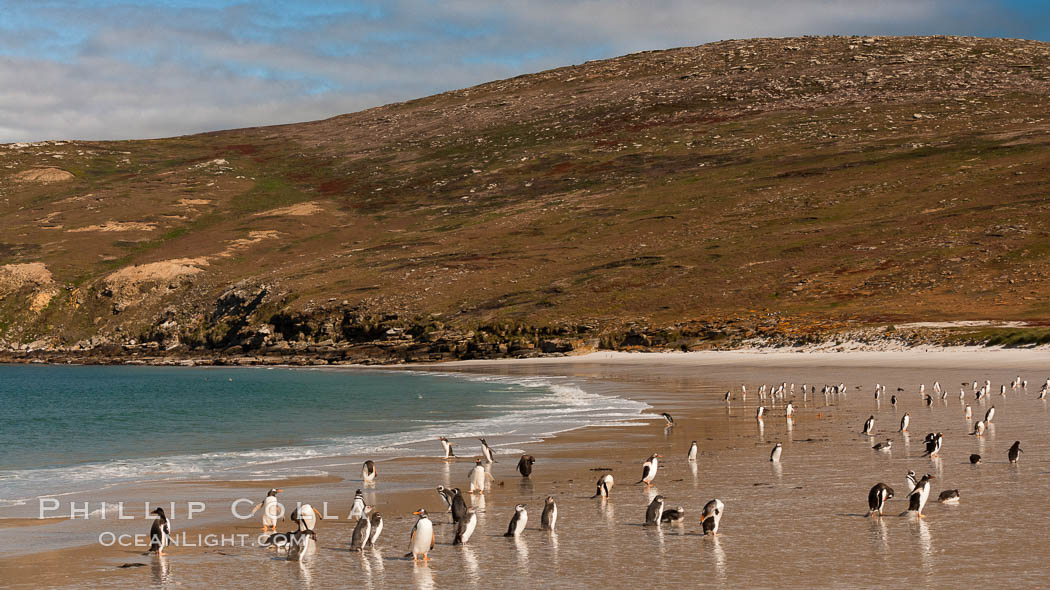 Gentoo penguins coming ashore, after foraging at sea, walking through ocean water as it wades onto a sand beach. Adult gentoo penguins grow to be 30″ and 19lb in size. They feed on fish and crustaceans. Gentoo penguins reside in colonies well inland from the ocean, often formed of a circular collection of stones gathered by the penguins.
Image ID: 23831
Species: Gentoo penguin, Pygoscelis papua
Location: New Island, Falkland Islands, United Kingdom 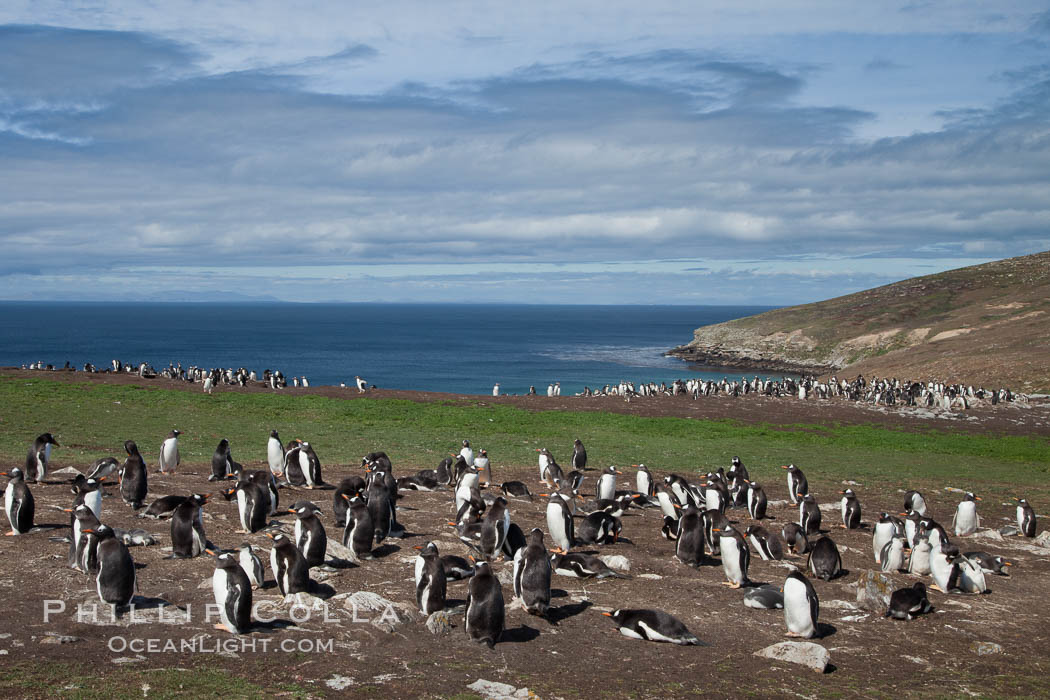 Soon I leave to hike over a low saddle in the island to reach the third spot of the afternoon, another beach. On the way there I pass several gentoo penguin colonies, set high on the grasslands above the water. The squacking and clicking is loud and raucous, and constant. I sit and listen for a while. After a while I continue down the grassy hills to the surfing beach and arrive there late. Clouds have stolen the sunshine just as I arrive. The others are all departing, photographers included, so I get the sense I have missed the surfing penguins. Eventually, the last of the passengers and staff head back to our originally landing spot, reminding me the last zodiac off the island is in 90 minutes. However, luck is with me and the clouds soon back off, leaving me alone on a beautiful, wide, white sand beach in late afternoon light. Gentoo penguins are coming ashore, splashing in the surf as they do so, making their way to their nearby rookery. I try to photograph them in action in the surf zone but have a hunch I did not stick any really good shots, we’ll see. I spend some time away from the camera, just watching the penguins as they do their thing, and listening to the sounds of the surf, wind and the clucking of the birds. There are large gentoo colonies on a rise above the beach 100 yards away making a constant, low buzzing sound. I am loathe to leave this idyllic spot, and wait until I only have about 15 minutes to hoof it the mile back to the landing in my goofy muck boots and heavy backpack. Time for a workout! I am sweating but happy when I reach the last zodiac and head back to the boat for a shower and a well-earned meal. After dinner I spend some photographing the birds – mostly giant petrels and a few albatross – that follow the boat as we motor to Westpoint Island. I light them with flash, producing a bright sharp bird against a darker sky, pretty neat. What a day. The trip has barely just begun yet I have seen so much already.

All of my photography from the trip is linked to the location where the images were taken. If you have Google Earth, you can see all of my photos from New Island overlaid at the exact location they were taken.