Our trip began with a two-night crossing from Ushuaia to the Falklands. During that middle day, as we sailed north-east though the Southern Ocean, we had some good bird watching, including albatrosses, prions (tiny little rocket birds I am not qualified to photograph), small petrels and the larger and more impressive giant petrels. I spent a lot of time on the back deck, admiring the birds and trying to get photos of them when they came close to the ship. (I typically shot birds from the big boat with 300mm f/2.8 lens with 1.4x converter on a full frame body, which was the perfect setup.) We were on the very stable 270′ ship M/V Polar Star, and had very calm seas for our crossing, so standing on deck and shooting was a breeze. 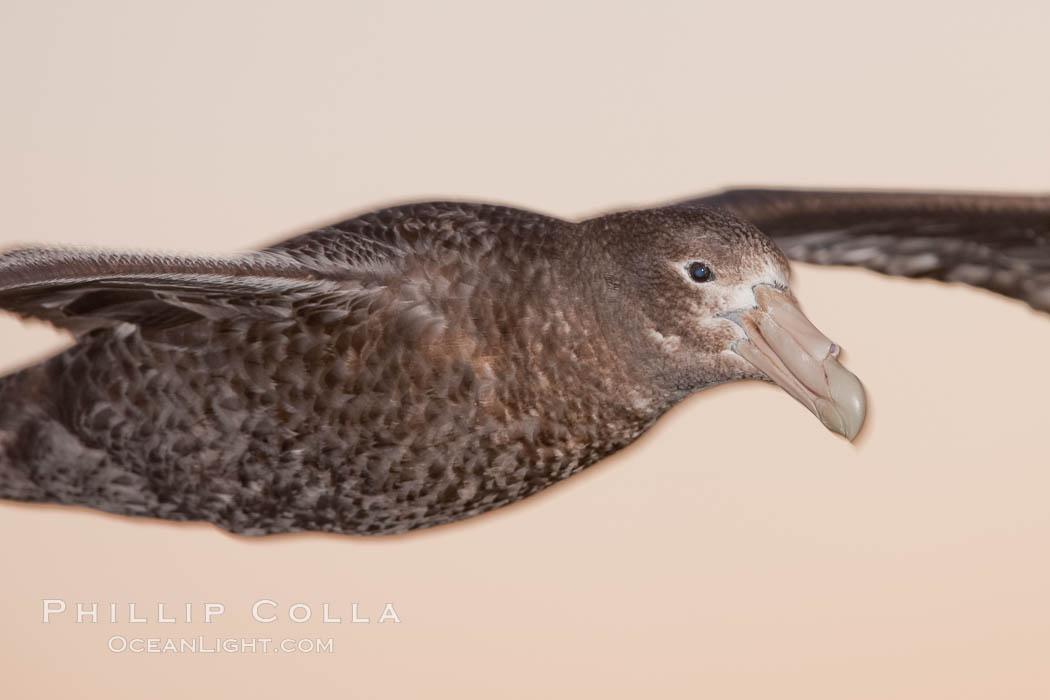 This day, the birds I photographed the most were the giant petrels, there were just so many of them. They are quite bold, coming alongside the boat often and soaring smoothly, making it easy for even a non-bird-photographer such as myself to get some keeper shots. As for identification, it was not clear to me which species of giant petrel I was seeing. Recently, I consulted with two staff member from our trip, Dave Shaw (Fairbanks, AK) and Jim Danzenbaker, both of whom are skilled at bird identification and educated us during our trip about seabird natural history. Dave is blogging about the trip too, and has had some great posts recently. Did I mention that the staff on our trip was tops? Thanks Dave and Jim. From them I learned that most of the giant petrels I photographed crossing to the Falklands were Southern Giant Petrels (Macronectes giganteus), but after moving south to South Georgia I ended up photographing mostly Northern Giant Petrels (Macronectes halli). Does that sound bass ackwards? Their ranges do overlap considerably. 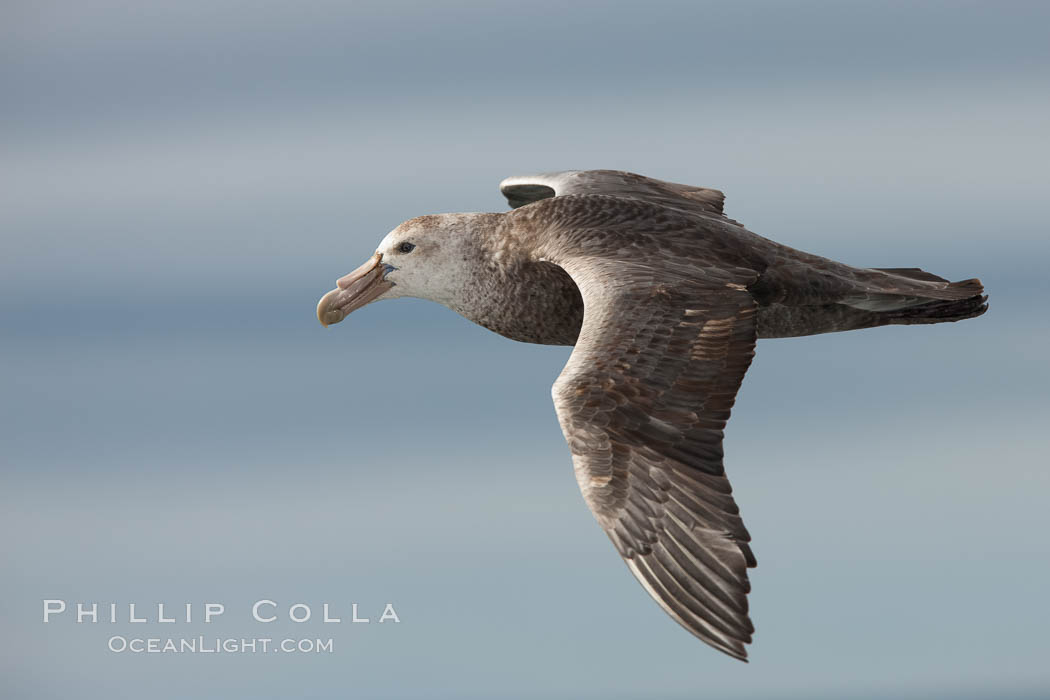 All the birds in this blog post I believe are Southern Giant Petrels. I’ll post about Northern Giant Petrels when we get to South Georgia Island. In appearance the two species are quite similar to one another which, combined with their range overlap, can make separating them difficult. Dave Shaw suggested that I lookfor a green bill tip (for Southern Giant Petrels) versus red bill tip (Northern), as well as eye color (pale is more common in Northern, darker eye in Southern). About the only sure thing for identifying giant petrels is the white morph, also known as a “white nellie”; the white morph is only known to occur in the Southern Giant Petrel. The Southern Giant Petrel measures up to 39″ long, with a wingspan of up to 81″. Adult males weight 11 lb. while females weight up to 18 lb. My hunch is that the large size for females is an adaptation to reproductive demands. Giant petrels range throughout the Southern Ocean, including Antarctica. The Southern species has a range which is centered somewhat south of that of the Northern species. When in the same location, the two species exhibit temporal separation in their breeding, with Northern giant petrels breeding some six weeks earlier than Southern giant petrels. As of 2009, there are estimated to be 46,800 nesting pairs and the species is listed as “least concern”, an improvement over counts and status of a decade ago. The giant petrel, like many pelagic birds, is at risk of injury and death from longline fishing equipment. Giant petrels are members of the tube-nose order (Procellariiformes) and display the characteristic tubular snout above the bill. 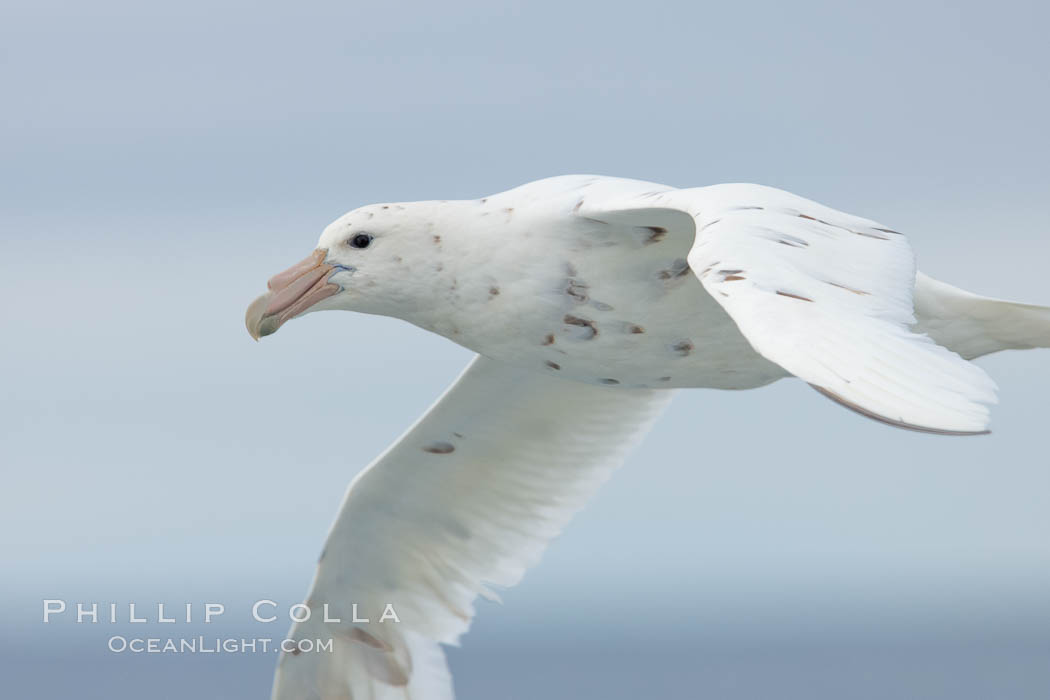 I often photographed the giant petrels at sunset, hoping to put them against a pastel sky and light them with a little flash. The results were most pleasing for albatrosses, but I did get some nice images of giant petrels zooming over the water after dark. I liked this one best: 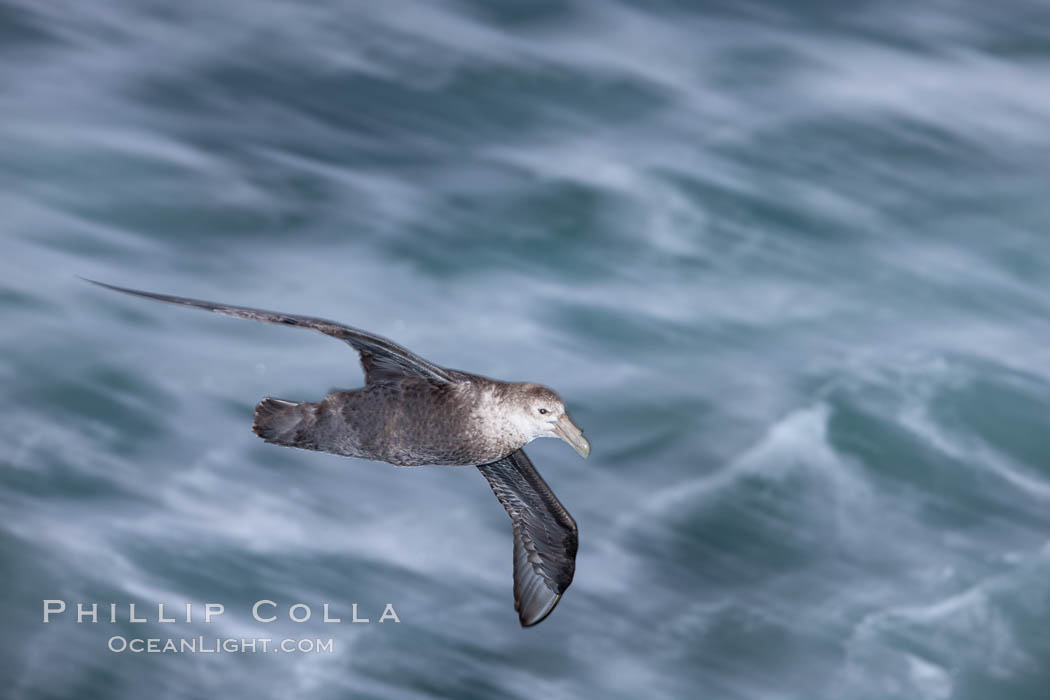